Get Cody’s Top Ten Apple Supplier Stocks eBook by clicking on the “Buy Now” button. (Or you can simply subscribe TradingwithCody.com for $99 a month to get a complimentary copy of the book PLUS six more investment eBooks PLUS access to Cody’s trades as he’s making them in real-time. Click the green “Sign Up” button to the right to subscribe to TradingWithCody.com).

If you’ve been reading or listening to me over the past ten years you know I think Apple will definitely get to $1000. And that would be a little less than a double (the stock is at $628 as I write this but has probably moved up by the time you read this). So the reward is definitely less asymmetrical than when I was buying the stock at $7.

Which is precisely why I think it’s time to look at Apple’s supply partners. Their share prices will have a halo from being associated with the Apple ecosystem. Much of what Apple is going to do in the next 5-10 years is baked-in demand from consumers replacing their iPhones and iPads. So while Apple will likely run another 100% from these levels, the suppliers should go up disproportionately more. I want to be long the spillover effect from Apple into the names I’ve picked out in a new book I’m calling “Top 10 Apple Supplier Stocks”.

To understand why we’re talking about Apple’s suppliers, let’s look at another West Coast high-tech giant that has transformed the world: Boeing.

Over the last 20 years Boeing advanced the science of aeronautics, launched multi-billion dollar defense systems that saw a dozen wars, created futuristic widebody jets and returned 242% for its shareholders.

And the company that supplies Boeing the TV’s that fit above the food tray gained 3285% . 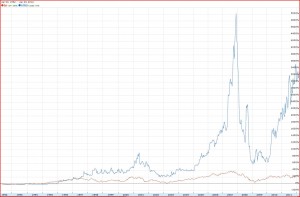 (Boeing stock BA vs Astronics ATRO over the last 20 years)

If you’re a subscriber of mine, you’ve no doubt bought in to the Apple story—and hopefully listened to me at any point over the last 5 years and bought some shares. The stock has run up so much, 5200% in the last decade, that it begs the question: How much higher can it go?It’s no accident that Apple’s supply guru Tim Cook was chosen by Steve Jobs to carry on his legacy. Apple’s supply chain is a huge competitive advantage that rivals are having an impossible time copying. When Apple’s design team decides it wants something, whether it be retina screens or aluminum shells or lasers that machine microscopic holes, they buy all the capacity that exists. Even the cycle on which they pay suppliers is structured as to squeeze out every last penny.

After the shareholders who receiving the newly announced dividend and buyback, Apple’s suppliers will be the biggest recipient of its massive war chest. Apple has shown a willingness to provide vendor financing and pay a premium when it wants a component; they are one of the few companies that can actually pass those costs along. And when you add in that a good deal of Cupertino’s cash is overseas, the logic of spending on the supply chains in other countries rather than paying taxes in this one makes sense.

I’ve spent the last few months talking to the geekiest of the geeks, supply chain experts and those in the know when it comes to Apple’s components. Steve Jobs figured out early on that the best way to execute his vision was to leave some revenue on the table for other companies, and outsource key parts of its value chain. This hasn’t worked out so well for other companies like Boeing but Apple has taken supply management to an art form. Over the next decade I expect them to keep working with the companies on this list, and possibly even buying some of them outright.

Bottom line is that you should own Apple, it’s firing on all cylinders and innovating even without its founder. But it makes sense to pay attention to the companies that help Apple create its magic. And the stocks I’ve highlighted are the ones that are best positioned to take advantage of the ever-continuing Apple boom.

Get Cody’s Top Ten Apple Supplier Stocks eBook by clicking on the “Buy Now” button. (Or you can simply subscribe TradingwithCody.com for $99 a month to get a complimentary copy of the book PLUS six more investment eBooks PLUS access to Cody’s trades as he’s making them in real-time. Click the green “Sign Up” button to the right to subscribe to TradingWithCody.com).