For the last few months, I’ve not minced words as I’ve repeatedly flagged Lender Processing Services as one of the clearest scapegoats of the cloudy-title/robo-signing/foreclosure-gate debacle, calling over and over “The Best Short in the Market“.   I’ve called the stunning lack of simply following standard real estate law that seems to have become industry standard for the TBTF banks and the companies who service their mortgages the most important but under-reported market story of 2011  (the steadily inflating app/tablet/cloud bubble that is just getting started as the Fed stokes bubbles with their unprecedented easy money policies continuing would be a close second, by the way).

Here’s some of the latest news and developments around this stock.   It’s part of what we need to be reading and analyzing as we continue to bet that LPS has much more downside ahead in coming quarters.

First off, while misery might love company, I don’t like seeing how many traders are out there now copying my short bet on this stock, as this LPS long points out in a recent article on SeekingAlpha: 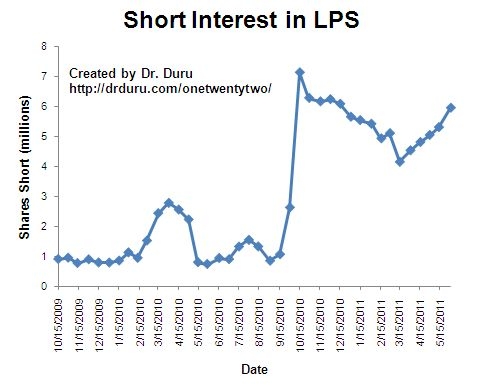 See how that short interest has been indirectly correlated to the collapse of the stock?   This short’s gotten crowded and any little respite in the action and/or hints that the company’s not in dire straits will scare these new shorts and cause at least a short-term scrambled eggs rally.

That said, as high as my conviction level is on this stock, I’d likely quickly get on the other side of that grill and look to increase my dark side exposure with both common and more options.

And here are some more links with key quotes from the article:

Foreclosure issue now is having an impact on LPS finances – “For the last 16 months, since Lender Processing Services Inc. first revealed that investigators were looking into its activities in the mortgage foreclosure process, the company has continually stated that it did not expect the issue to have a “material adverse impact” on its finances. What that means is, LPS doesn’t expect the various state and federal examinations to result in huge fines or the various lawsuits against the company to result in huge financial penalties.   However, last week we learned that the foreclosure problems are having a financial impact on LPS. Because of the investigations that involve LPS and many major mortgage companies, lenders have slowed down the pace of foreclosures.”

LPS has been in a steady and accelerating down trend since I first flagged it for readers back when it was in the mid-$30s just a couple months ago.   It remains my biggest short and I continue to look for opportunities to build my dark side bet ever further, and I continue to dig for other potential scapegoats in this ongoing foreclosure-gate debacle.

t's a pretty solid open, with good breadth...
Desperate bears and the market's path of least resistance
Back in the saddle
I really am buying some real estate here...
NYC trip, No chat this week