“There’s a lot of pressure built up by both the bulls and bears regarding whatever outcome Cyprus’ government comes up with in the next five days. So thinking that scenario out trading-wise, I still come up rather bearish about the near-term. That is, I could see a sell-the-news reaction if the supposed best-case-scenario plays out as Cyprus agrees to steal their customers’ deposits to get more bank welfare for their banks’ shareholders and lenders from other EU citizens. Or I could see the markets really tanking if the Cyprus government does right by their people and leaves the EU and goes back to their own currency and wipes out most of their sovereign debt as they do so.” 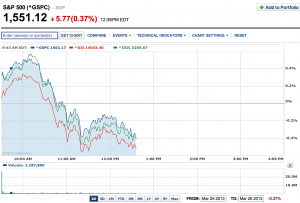 That is a definite sell-the-news kind of reaction, though we’re only talking about a 1% intraday move, which isn’t a full “dislocation” which I define as a 2% intraday move, and which would be very bearish given the steady stream of up-ness in every stock market chart over the last few months.

I’m sticking with the higher levels of cash and shorts and puts. Do you guys feel the angst from the retail/home investor/trader and can you feel the defensiveness from the pros? That’s probably also bearish though it’s nothing to hang your hat on obviously, being so subjective and un-quantifiable in nature.

Aside from the near-term contrarianism of such feelings out there, there’s something tangible to address in those emotions.

I can tell you I sense serious angst from the retail investor, and it’s spiking right now. My subscribers, friends, and family have overwhelming demand for asset allocation strategies and an overall money management approach, especially from people nearing or in retirement. I’ve spent all weekend working on putting some thoughts, ideas, strategies and tactics together for you guys on this topic.

Today’s Deep Thought of the Day –

Eleven years ago when I launched my tech hedge fund, I paid my prime broker, Bear Stearns, $600 a month for my hedge fund hotel office and I paid more than $1000 a month for broadband, telephone, TV, and streaming market services.

Today, the space where I used to rent hedge fund hotel office is filled with JP Morgan programmers and traders and an office of equivalent size in that kind of a midtown space would easily rent for $2000 a month.  But you could get the same broadband, telephone, TV and streaming market services for $200-300 a month.

Here's me answering a subscriber question that I'm sure others of you are thinking...
50 Stocks for The Voice Revolution
We've seen the Nasdaq rally nearly a ful...
Thoughts on Apple, its suppliers, Google, Alibaba and more
A tale of two China stocks