I told you guys over and over that this ongoing stock market bubble could last longer and go higher than just about anybody thought possible. The stock market bubble we set up for four years ago when we launched Revolution Investing and I wrote the following are here.

“And I do think we’ll see a lot of strange asset appreciation turning into horrific and painful bubbles in the next five years…assuming the stock market is actually a part of that bubble – let’s picture the DJIA bubbling up to new highs and hitting 15,000….what’s the end game of that? Another bubble popping? More pain from trillions of misallocated capital.”

And thus, every market chart you look at is insane.

I’ve talked before about how sometimes the most important aspect of a big move in any asset is how quickly that big move developed. In other words, when you’re looking at Treasury Rates and trying to figure out some semblance of the next move rates are about to make, it’s often the rate of change and not just the change itself that is important.

If rates overall at at historic low levels, only seen once in recorded economic history as they are right now, then you know that at some point they will go higher. But as I’ve pointed out many times over the last few years, the question for higher rates isn’t if but when. And over the last five years, I’ve seen almost as many professional money managers and traders lose their shirts betting on higher rates as I’ve seen lose their shirts betting against the stock market bubble that’s now here.

As traders and investors, as protectors of our money, we have to be flexible and swing at the pitches the market throws at us when they get thrown. Trying to force a bet on higher rates and trying to time a top to this developing stock market bubble has been trying to bunt a wild pitch when you needed to just take the walk.

There’s never a bell that dings when the perfect pitch is being thrown. You have to read the signals, read the pitcher, read the pitch itself, and make sure you keep your eye on the ball into the bat. So what’s the upshot of all this analysis? I think it is indeed time to start scaling into some bets that higher rates are coming and likely to come fast when they do finally come.

Let’s run through a few different time frames of Treasury rate charts and you’ll see why I think it might be time to bet on higher rates finally.

The yield on a 10-year Treasury right now is down 80% from where it was thirty years ago. 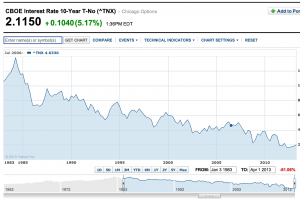 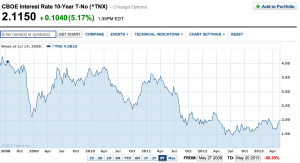 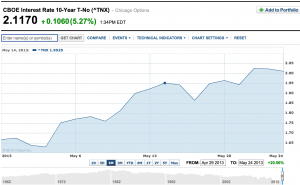 That 20% spike in rates over the last thirty days is big, though we’ve seen bear market rallies in the rate charts like this before. The biggest determinant on when higher rates will finally hit, is whether or not the US dollar remains a relative “safe” holder of value against the other major currencies (including gold).

I am going to step in and buy a few puts on the IEF, which according to its prospectus, “seeks investment results that correspond generally to the price and yield performance, before fees and expenses, of the Barclays U.S. 7-10 Year Treasury Bond Index. The fund generally invests at least 90% of its assets in the bonds of the underlying index and at least 95% of its assets in U.S. government bonds.”

Trade Alert: Trimming yet more SLV calls and a new short position
Trade Alert: A Little More Nibbling
Trade Alert - Scaling into one of our alternative energy ideas
Trade Alert: Putting Some Money To Work On The Long Side
Special Bonus for TradingWithCody subs: Free access to the coolest, smartest, most addictive stock m...