Let’s do some Revolution Investing analysis on a small cap wearables company I’ve done some homework on but decided not to invest in.

A few weeks ago, I spent a couple hours on the phone with the President and other executives from Vuzix, a small cap wearables manufacturer. The call was set up through my friend and mentor and perhaps the single best value investor you’ll ever meet, Robert Marcin. While he specializes in value investing, Robert’s also an opportunist and he knows how bullish I am on the Wearables Revolution and so we decided to take one of his broker’s up on their offer to meet Vuzix and hear their vision for company.

Vuzix is a leading supplier of video eyewear products in the consumer, commercial and entertainment markets. The company’s products- personal display devices that offer users a portable high quality viewing experience- provide solutions for mobility, wearable displays and virtual and augmented reality. Vuzix holds over 48 patents and patents pending, as well as numerous IP licenses in the video eyewear field. The company has won 13 Consumer Electronics Show Innovations Awards and several wireless technology innovation awards, among others. Founded in 1997, Vuzix is a public company (NASDAQ:VUZI), with offices in Rochester, NY, Oxford, UK and Tokyo, Japan.

Here’s a picture of some of the wearables they’ve developed and are presently trying to sell: 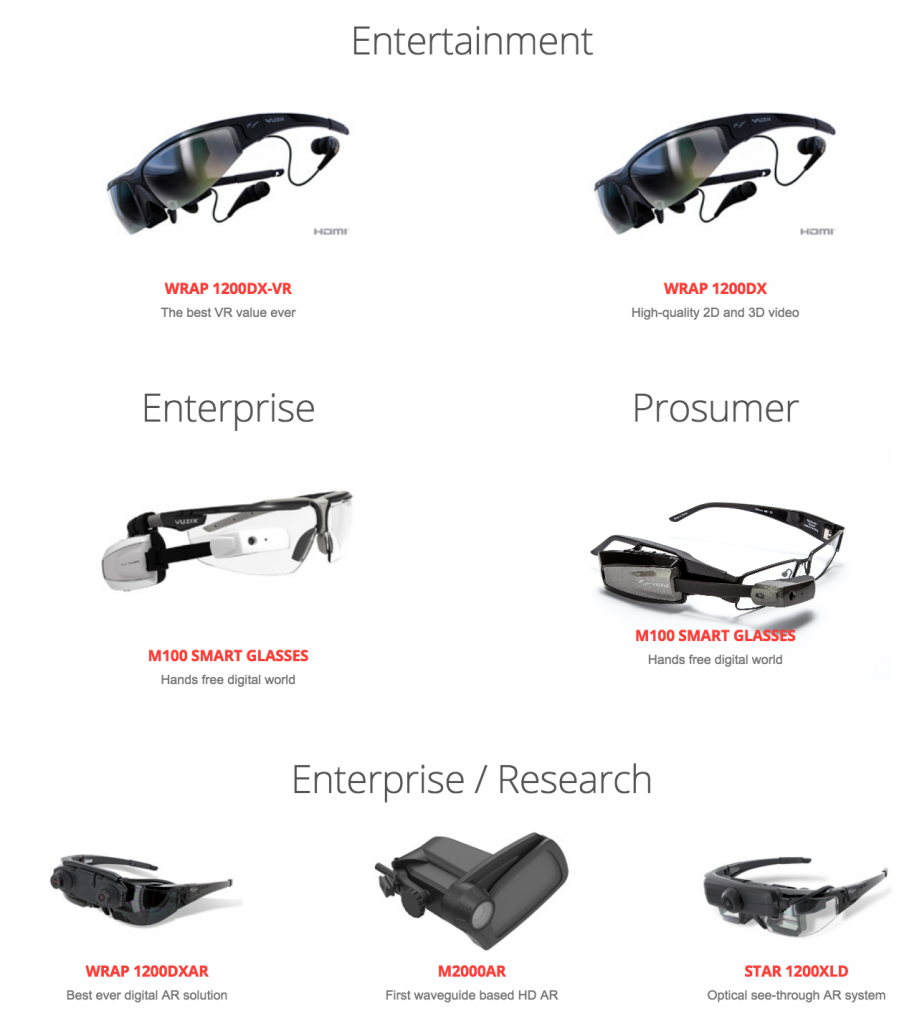 Here are the pro’s for Vuzix:

I liked what the management had to say and their vision for the Wearables industry. The company is tiny but it has a huge headstart in wearables design and even has a few patents too.

When you invest in a tiny market cap company that is in front of a huge new multi-billion dollar industry (wearables), you have the potential for a 10 or even 100 bagger or more.

Intel invested in the company earlier this year in a bit of another complicated deal, buying rights to own about 30% of the company for $25 million. I assume Intel’s investment arm did some serious due diligence before committing that money to Vuzix, but then again $25 million for a Silicon Valley giant with a $155 billion market cap isn’t about to move the needle either.

Here are the con’s for investing in Vuzix:

I’ve written many times over the last decade or so about why I focus so much on investing in platforms like Google’s Android, Apple’s iOS and Apple Watch and so on. Vuzix is going to have to bet on other company’s platforms, which already have critical mass, to compete in what will be a highly-competitive industry like wearable devices. Can a US-based manufacturer compete against what will be an onslaught of Chinese devices in coming years?

Why is the company public in the first place? The company did a 75-for-1 reverse split just about a year ago and that’s the only reason the stock isn’t a “penny stock.” The stock had a market cap of just $50 million before doubling in the last year. If the company’s prospects were so great, why do they need the public retail investor’s money requiring it to trade on a stock exchange?

I don’t like seeing the company’s history of using insider-advantaged, complicated converts to raise money just to stay afloat such as this one back in June 2014 after they did the 75-for-1 reverse split.

Trying to ramp this company up from being a small cap, insider-controlled company with a few million dollars in total sales to becoming a billion dollar revenue company in the next five or ten years isn’t easier either. Manufacturing is tough, scaling manufacturing even with a FoxConn-type partner doing all the actual labor is also tough, trying to keep up with the likes of Apple, Google, Facebook, Amazon, Hewlett-Packard and other giant competitors who will get into the wearable goggles and virtual reality wearables is…well, crazy-tough.

There are enough red flags around VUZI that I’m not personally willing to risk my capital on the company’s stock, at least not yet. If the company does start to grow and manage that growth and show some potential of scaling revenues to the tens-of-millions of dollars in the next few quarters I’ll likely have to pay a bit more than the current quote, but we’ll still be very very early if the company is actually worthy of our long-term capital.

It's just flat out ugly out there in the...
Buy the mall, Alexa and Rolling Stones; Sell Bitcoin, Pandora and AMD
Cody's Trades of the Week for October 3-7, 2016
Proper portfolio allocation, Me on Google on CNBC, the Stellar Cryptocurrency and more
Is the streak over?  In the midst of mor...