I’ve been saying we probably need a down -800 day on the $DJIA to wash out this market. That said, looking at the carnage out there, I sense there’s some panic in the air today already. Finally. Here’s a sampling of random names getting killed this morning: 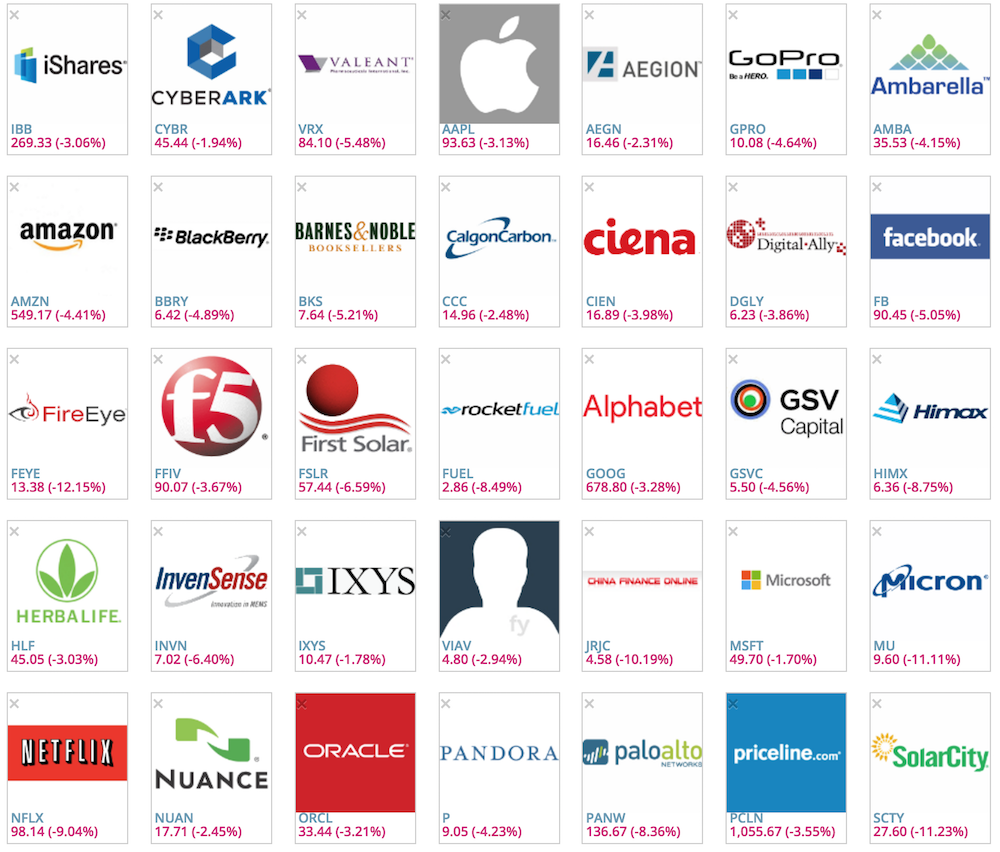 Clearly I should have been just bearish and short into the new year, but I’m not trying to game near-term market swings anyway. More to the point, we’ve halved our number of longs, trimmed our existing longs and added shorts in the last year as we’ve gotten more cautious. I should have bought puts and taken the threat of the Great Corporate Debt Bubble Popping that I wrote about in December:

“I’m still working on analyzing where we are in the Great Corporate Debt Bubble and if it’s about to pop. Ironically, I don’t think it’s the Fed raising rates or not that will eventually pop the Great Corporate Debt Bubble, it’s going to happen more naturally as overleveraged companies run into problems funding their debt and their dividends as we’ve seen many commodity companies like $FCX $KMI $CKH and others collapse and likely to have to reorganize if commodities don’t rebound strongly soon. Higher rates from the Fed would likely exacerbate the problem, but I don’t think the Fed’s going to raise rates in the midst of this commodity melt-down.

But I do think there’s increasing risk that we could have some sort of a Black Swan type event catalyzed by turmoil in the Great Corporate Debt Bubble.”

But even as bearish as I’ve been on energy and as ahead of the curve as I was in warning that energy could take years or even a decade to rebound back to its former highs, I don’t think we had any way of foretelling when I wrote that just how badly oil itself was about to crash in this new year. Now it’s not just the popping of the Great Corporate Debt Bubble happening in real-time, but the threat of some sovereign currency crisis leading to some sovereign debt defaults is also spooking the markets.

Is the Bubble Blowing Bull Market that we rode from 2010 when I left TV and came back to investing and trading in the markets to the end of last year finally over? Well, in some sense, the answer is simply yes. The energy and commodity crash have become a Black Swan worthy event much much quicker than anybody expected. Not only that, but aside from a handful of stocks, there are so many once highflying companies that were worth billions or tens of billions of dollars that are down 50-90%, including GPRO, KMI, CHK, FCX, X, TWTR, YELP, Zillow Z, Pandora P, Micron MU, Ambarella AMBA, Stratasys SSYS, Valeant VRX, and so on from every sector of the market — it’s clear that many stocks have already gone through a crash.

We’ve been somewhat insulted by the fact that we owned some of the few stocks that have actually done well in the last year while so many others were crashing, including Facebook, Amazon, Google and Netflix. But even those names have joined the market rout of 2016. I trimmed each of those names when they were at there all-time highs back in December, and at some point, I’m looking to buy those share back. Regardless of whether the Bubble Blowing Bull Market is dead, some of the best Revolutionary Companies in the world will continue to increase in value over time.

We have quite an interesting set up here. On the one hand, we see the markets just this morning finally getting panicky which makes me want to put some money to work. On the other hand, we’ve got energy crashing yet again with oil down -7% on the day below $27 a barrel and serious Black Swan currency and debt threats developing as a result of that ongoing oil crash. Then again, Facebook and Netflix are at levels at which I’ve been waiting patiently to see so I can add to them. Then again, we still haven’t had that down -800 day on the DJIA that I’ve been looking for before I’d put much money to work…

So here’s what I’m doing now. There are a few stocks out there that I’d like to get some long exposure to but that I don’t want to commit a bunch of capital to. If the stock markets are to stabilize, some of these names will pop 5-15% in a hurry and could go up 30% or more in the next few months. If markets continue to tank, some of these names will be down 5-15% in a hurry. With panic in the air today, I think the risk/reward lies in scaling into a small tranche of longer-dated call options in some of these names today. I’m going to use just a tiny bit of capital, less than 1% of the portfolio, to scale into some call options in the following names:

Under Armour UA July call options with strike prices around $65 to $70.

Sony SNE call options with strike prices around $22 to $23.