Q. How big of a pullback are you expecting?

A. I could see at least a couple 5-10% corrections here and there in the stock markets over the next three to six months. There might be some 5-10% spikes over those months too though. I’m not predicting any major crash. Just ebbing while the markets are flowing, as usual, as per our playbook.

Q. I’m fairly new to this site. Why do you think the Fed will switch gears and go back to easing in the next 3 – 4 months? The debate right now seems only about the pace of tightening. I don’t think I’ve heard or read from anyone else that the Fed will go back on it’s current 25 basis point hike.

A. Here’s a quote from a month ago in one my articles on this topic: “What’s interesting is that pretty much every bearish macro-economy, geopolitical, currency, corporate earnings, energy and commodity bullet point we mention, basically everything ailing the global economies and stock markets, would be helped by a weaker dollar. Meaning that the Fed’s got a helluva lot of reasons to cut rates back to 0% and even kick-start another round of QE and try to come up with newer ways to print some money. You certainly can take any further rate hikes off the table.” For additional reading, please see my full report entitled “Everything You Need to Know About Negative Interest Rates.” You can also check out my interview on the subject with Investor In The Family.

Q. I’d appreciate it if you would let us know what it would take for you to consider your Fed viewpoint wrong (or at least very early). For example, if the Fed raises rates in the next few meetings would that make you re-think your feeling that the Fed won’t raise again?

A. I’ll believe the Fed will raise rates again when they actually do. I think most signs point towards them staying up and/or cutting and/or creating new QE in months ahead.

Q. I am just listening to a BP Capital presentation on oil – (Boone Pickens) – they are showing the following chart on the supply curve which shows how prices could move quickly with small moves in demand. 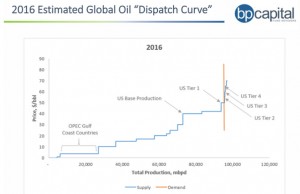 A. I think Boone Pickens spends most of his time either talking his book or lobbying for more tax breaks and subsidies for his energy-related businesses. He’s been wrong pretty consistently in predicting a huge energy price rally throughout the energy price crash over the last couple years, no?

Q. My brother in law spent his career in the energy and pipeline industry and made two comments. First – most energy companies hedge the current year 90%, maintain a 50% hedge for year two, and 25% hedge for three years out. Last year was year 1 so there is a lot more pain to come. Second – energy companies are already restructuring debt under the radar at around 60 cents on the dollar and won’t announce it until they report. Thoughts?

A. There is a slowly-building scramble by energy companies to refinance their debt and/or otherwise recapitalize their balance sheets. There might be a few cases of energy company bondholders settling, but I doubt most bondholders would take a 40% cut on their loans to energy companies unless the equity itself is already almost worthless.

Q. Hi Cody Hope you and your family is doing well. What do you think about gold and gold stocks right now? Thanks.

A. The path of least resistance for the price of $GOLD is higher. The tipping point for a major spike of 20-30% or more in the price of gold is if/when the FED formally moves to an easing cycle again, which I expect to see sometime in the next few months. Gold miner stocks have too much debt in general for me to want to risk buying them, but they are a high-beta way to play the price of $GOLD itself.

Q.What your outlook on oil stocks?

A. I outlined my outlook for Oil in the big report I sent out yesterday: What’s next for energy, stocks and the economy. As I wrote in the report: “Energy Short-term – The big story in energy isn’t OPEC or fracking — it’s debt. There is at least a couple trillion dollars that US-based energy companies carry on their balance sheets. There’s another couple trillion dollars in sovereign debt from countries including Russia, Venezuela and other members. Most of those US-based energy companies need $40 or higher oil prices or they will end up defaulting on their debt payments, going bankrupt and reorganizing their financials. The problem is that there is still so much capacity from fracking and new technology wells, that can quickly be brought back on line, that every time oil does bounce well above $40 a barrel, all these heavily-indebted, very scared companies will turn that capacity back on and supply will then rise and oil prices will likely head back down into the $30s. Over the next two to three years, we’ll hopefully see dozens or scores or even hundreds of energy companies go bankrupt, dozens of formerly large cap stocks like FCX, CHK, BTU will all end up bankrupt, allowing the companies to write down all that debt they won’t ever be able to pay back and the new shareholders, employees and executives can then prosper. That’s actually the best case scenario. The worst case scenario for energy near-term would be if energy prices were to spike strongly again, and oil were to spend the next year above $50 a barrel, and all these zombie energy companies with too much debt will think they’ve got an indefinite reprieve. The energy sector needs to recapitalize (or get bailed out like the Republican Democrat Regime did the banks back in 2008 — more on that in a minute). Energy Long-term – The fact is that if you look back at the historical cycles in energy, they can take 10-15 years or even longer to play out. As Jim Rogers used to explain to me on my old TV show, energy and commodity cycles typically last 17-20 years. We’re in year two or maybe three of the energy and commodity downturn and people think it might already be over? I strongly doubt it. Don’t forget that solar and some other renewables are going to become an ever bigger part of our energy systems and they will keep downward pressure on energy prices for decades to come too.”

A. $KLAC has destroyed their balance sheet with debt-funded stock buybacks and the $3BB in debt vs $1.5BB in cash there keeps me away from the stock. $OTEX, like $KLAC, would be a lot more compelling potential investment if they didn’t have net debt — $1.6BB in debt vs $600MM in cash. I think giant banks like $WFC have it as good as it can possibly get right now, with all the subsidies, bailouts, 0% interest rates, friendly regulations, and so on right now… I wouldn’t want to invest in any major bank stock like $WFC, $C $BAC, etc. for the long-term.

Q. Hi Cody I’ve owned $JPM for a number of years. My cost on it is $30 and it’s trading at approximately $60 with a 3% dividend. I’m not too bullish on bank stocks, yet I am kind of reluctant to pull the plug given that I purchased at $30 per share and it’s now at $60. Would you sell it or hold on?

A. I can only tell you that I personally think there’s too much risk and not enough potential reward in owning $JPM. See my earlier comment about the giant banks: “I think giant banks like $WFC have it as good as it can possibly get right now, with all the subsidies, bailouts, 0% interest rates, friendly regulations, and so on right now… I wouldn’t want to invest in any major bank stock like $WFC, $C $BAC, etc. for the long-term.”

A. $IPHI looks quite interesting. Strong top-line growth of 20% per year, trading at 20x next year’s earnings estimates, $300MM cash vs $170 debt, which they raised recently to fund growth and acquisitions. Were I more bullish in general about the markets here, I might be more interested in this stock at these levels. I would love the chance to buy it in a crash at some point, so I’ll put it on my Scutify Watch List. Thanks!

Q. Besides the usual candidates (e.g. $GOOG) for the next generation of VR, are there any dark horses?

A. Best plays for the Virtual Reality Revolution include: $NVDA, $SNE, $QCOM, in addition to $GOOG and others that I do own. Dark horse small cap plays on the VR sector include $GPRO, $HIMX, and $VUZI, none of which I own.

Q. I know you sold $SYNA a while ago, but I kept my shares (now I wish I sold too). What is all today’s volatility about? Would new rumors of a Chinese acquisition spur it up again? Thanks for all your insights.

A. I haven’t been following the $SYNA drama as I don’t want to try to game whether it’s going to get acquired or stay single.

Q. What do you think of $GILD here?

A. $GILD makes 90% plus gross margins selling its products and I don’t think that will continue. In addition, I think analysts’ earnings estimates are too rosy on those gross margin assumptions. I’m short $IBB in large part because I think $GILD and other megacap biotechs are ripe for crashes.

Q. What do you think about $SUNE?

A. I have long warned Trading With Cody subscribers to stay away from $SUNE and I still believe that to be the best course of action in regards to that stock. Here’s me talking about $SUNE in Cody Kiss & Tell when the stock was 3x today’s quote: “I’m not comfortable with $SUNE‘s net debt of nearly $5 billion.”

Okay folks, that’s a wrap. Thank you for a very enlightening and challenging Q&A Chat.

Baby Shark stock market is now a Mama Shark stock market
Greed's back baby, Why we trim, Gamestop vs Netflix and more
Nuance is the big mover on the sheets to...
Cody Kiss & Tell: Tax-shelter plans, Donald Trump and more
Two new buys this morning