Q. Greetings … RE the Fed. If they raise, it can be a sign (perceived)  of economic strength backed by historic rise in markets during this cycle. If they lower, it can give rise to more investment cash fuel and also float the market some more. Probable scenario while still be steady and cautious?

A. I expect the Fed is going to raise rates as economy grows in the next few quarters. That is bullish for stocks in my analysis.

Q. With your overall bullish sentiment on the markets and economy at this time, are you at all getting bullish on oil and related stocks? Wondering your current stance on that sector? Thanks.

A. I’m not terribly bullish on oil or oil stocks — I think we are at the upper end of the new normal for oil prices probably $35-50 or so and there’s still way too much debt on most of the the oil companies’ balance sheets. At $35-40 oil, many will in trouble again and many still are at risk of bankruptcy even with oil at $50.

Q. After earnings $AMBA is surging, notwithstanding the $SNE dependence you mention (the latter is also on fuego), you see these moves as short term happiness, or are these two in particular gaining momentum?

A. Good question. I am not a big momentum chaser, but I do think $AMBA and $SNE are each looking like the momentum is back. I even saw IBD hype on AMBA today, which I hadn’t seen in months. That said, the question for me is more where they will be in six years rather than six weeks. I do think both have compelling risk/reward long-term and I continue to hold both.

Q. Is BSPM the new HMNY?

A. $BSPM and $HMNY look like classic pay-for promotion penny stock scams that I would stay away from.

Q. Any thoughts on $AMD , which seems to be getting competitive with Intel again and could get in on the VR game?

A. I wrote this about $AMD in my #1 Amazon best seller, “50 Stocks for the App Revolution” back in 2011 and it still holds true today: “A turnaround anytime soon doesn’t seem to be in the cards. While nearly every other one of its peers sits on huge amounts of cash, AMD is saddled with $2.2 billion in net debt. Its already starting with a deficit in tech R&D and its lack of money in the bank makes it practically impossible that it will give Intel trouble again anytime soon. Don’t go bargain hunting on this one.” https://tradingwithcody.com/201… $AMD was at $8 when I wrote that. Now it’s at $4. I wouldn’t be surprised if it goes bankrupt sometime in the next few years and $NVDA or $INTC snaps them up for pennies on the dollar.

Subscriber follow-up:  Wow. Ok thanks a lot for your insight there.

Q. $BIDU seems to have finally settled down a bit from the wild swings it had earlier this year. They seem to be following $GOOGL in a lot of their projects such as self-driving cars. Do you feel now is a a good time to settle into some $BIDU, understanding you don’t really trade China.

Q. Do you think people are already discounting the effect of the I-Phone 7? I am asking because we usually get a run of 10% or more into a release but all I hear about these days is how special the I-Phone 8 will be. Have we jumped one whole release and does $AAPL continue to trade strongly until the 8 comes out? My feeling is no matter what $AAPL does it is never enough and now the next edition of the iPhone doesn’t seem like it will be enough.

A. Hmm, I think I see the opposite off what I understand you to be asking. With $AAPLdown 25% from its highs a couple years ago and struggling to get above $100, I’m thinking the market is basically discounting a busted iPhone 8 release. That is, if the iPhone 8, whenever it finally does get announced, will likely drive some action in $AAPL, but right now the markets seem to be factoring a slow decline of Apple ecosystem.

Q. Any thoughts on AVAV? Looks like they make unmanned aircraft…. drones?

A.  Aerovironment is probably the purest play on the Drone Revolution, but they are not getting into the consumer drone business fast enough for my liking. Here’s what I wrote about $AVAVback in the ebook “12 Stocks for the Drone Revolution” two years ago when $AVAV was at $35. “AeroVironment is a technology solutions provider that designs, develops, produces, operates and supports an advanced portfolio of electric transportation solutions and electric-powered Unmanned Aircraft Systems (UAS). AeroVironment’s comprehensive electric vehicle (EV) charging solutions include EV home charging, public charging, fast charging, data collection, grid-integrated communications and complete installation, training and support services for consumers, automakers, utilities, government agencies and businesses. AeroVironment’s industrial electric vehicle charging systems support thousands of electric materials handling vehicles in mission-critical supply chains for Fortune 500 enterprises. AeroVironment’s power cycling and test systems provide EV developers and EV battery manufacturers with market-leading simulation and cycling capabilities. Most exciting is the company’s prospects in bringing its growing drone businesses into the consumer and commercial markets from the military markets. Revolution Investing Rating: 8/10”.

Q. In his latest Altucher Report, James talked a lot about DNA sequencing and how it’s still in its infancy. He had a lot of aggressive names to play… Myriad Genetics (Nasdaq: MYGN) Pacific Biosciences (Nasdaq: PACB) GenMark Diagnostics (Nasdaq: GNMK) Luminex (Nasdaq: LMNX) Cepheid (Nasdaq: CPHD) Affymetrix (Nasdaq: AFFX) Foundation Medicine (Nasdaq: FMI) Genomic Health (Nasdaq: GHDX) Any opinions on any of those? Would you ever consider a small cap company like CPHD?

A. “CPHD has a $2BB market cap, not so small cap. I’m not up on all the names listed there, but I do think DNA/Gene Sequencing is going to be huge and there will be some big winners in that sector. I’ll do some more homework on all these names and see what I come up with.”

Q. I was looking at FB before your email. Sitting very quietly in sideways consolidation on declining volume. Earnings not until 7.27. Thinking of adding some here as risk can be very contained. Any thoughts? 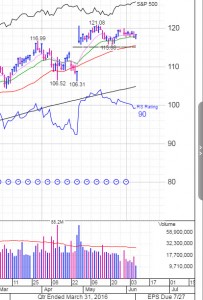 A. Few catalysts to drive $FB until its next earnings report in another four weeks as you noted. I’m bullish on $FB for the next five years, but I don’t know if I’d try to game its move over the next five weeks right now. I’m happy to make a short-term trade like that when I see the risk/reward compelling, but I don’t “feel” it on $FB just this minute.

Q. Can you explain the new shares of FB we will receive, what will FB trade at?

A. Let me do some more homework on the $FB shares and I’ll write up a report about it for you guys.

Q. WATT is being hyped to death by Agora – do you have any view on this company?

A. WATT is a speculative venture-capital-like investment. The company is burning millions of dollars per year but sales are supposed to go from a couple million last year to $4 million this year and over $12MM next. I’m not sure that the company wouldn’t STILL need more cash even if it grows that fast. You’d have to have a lot of faith in the management and/or the technology if you’re going to risk on your money on this one.

A. I doubt $LC can recover from the stain on their reputation from faking loan documentation and the ousted CEO’s questions…would rather be short than long Lending Club.

Q. What about $NKE? It has fallen since Q1 results which IMO were goods. I think the market is giving nice opportunity to start a position in this strong and leader company.

A. $NKE is worth $90BB. Can it double probably. Can it triple and be worth nearly $300BB — 1/3 of a trillion dollars — in the next decade? Possibly. I just have a hard time seeing a sports-related retailer worth that much.

Q. I hear recently a lot about $IBM and Watson! Some people seem to be quite excited about the potential! Any change in your opinion on $IBM?

A. Not really — still pretty much thinking what I wrote a couple weeks ago about $IBM: “1. $IBM is ‘cheap’ on a P/E basis (regardless of the fact that I don’t like their financial engineering of the E). 2. Artificial Intelligence is likely to head into a bubble in coming months and quarters and IBM’s Watson is the Xerox of AI right now. I’d be long $IBM if their balance sheet were stronger and their earnings less managed.”