I’m quite sure that Britain and the world will be better off the day the EU goes away anyway. More prosperity, more freedom, less control from a bunch of bureaucrats in Germany…these are good things. But many global corporations will lose some subsidies, welfare and help from Brussels, and so the stock market will have to adjust and get its arms around which companies will be most hurt by that.

And anyway, I wouldn’t be shocked if the powers that be in Britain and the EU figure out a way to make them vote again.

So to be clear, an actual Brexit is a good thing in my humble opinion. But whether Brexit actually happens in coming months or not, it will likely be a great opportunity to buy stocks if they’re down 5% or more in the next couple days. You know I’ve been keeping powder dry for just this set up.

Here’s an article I wrote in 2011 called “Let the Euro die and the bull market resume June 29, 2011” that I think you’ll find quite relevant still today.

Let the Euro die and the bull market resume

I just snuck out of a bunch of fascinating meetings with the Dow Jones folks to address the markets and the latest “the Euro still exists!” relief rally.

I’ve been saying for weeks that we should ignore Greece because it doesn’t matter and that any and all Greece-related selling was a great buying opportunity.  I pointed out how the market cap of just one little company in this country (Apple) is larger than the entire GDP of Greece.  I’ve pointed out that for decades people have repeatedly sounded the alarm about various other countries’ collapse and how they are supposed to doom our own markets and economy.  And indeed, by far the number one response to such statements is:

“It’s not about Greece, it’s about the possibility of contagion and whether or not the Euro can survive at all.”

And my rebuttal to that is quite simple:

I don’t care one iota about the existence of the euro when it comes to my stock market analysis.

Let’s not just listen to these same reporters, pundits and economists who missed predicting the entire credit crisis and now warn us about why the Euro’s supposedly so important to our markets and instead look at some history, people.

The Euro officially came into existence for Austria, Belgium, Finland, France, Germany, Ireland, Italy, Luxembourg, The Netherlands, Portugal and Spain on January 1, 1999 when each and every one of those countries adopted the Euro as their official currency.   The DJIA was at 9184 or so on January 1, 1999. 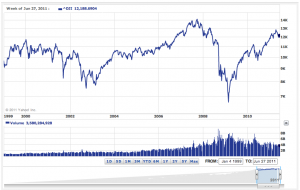 In other words, the stock market’s returns since the founding of the euro hasn’t even matched inflation.  And you want me to freak out that the Euro might go away if the banks who’ve been lending trillions of Euros to these governments might have to recognize some losses and that such recognition of losses would mean the demise of the Euro?  Bring it on! 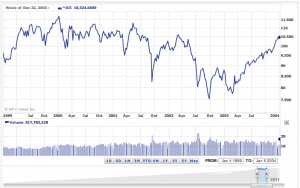 Will Apple sell fewer iPads in 2013 if Poland, Slovenia, Greece and Spain all leave the Euro and go back to using their own currencies?  No!

Will earnings in the huge move from cell phones to smartphones and the huge economic boom for companies selling into that move suddenly reverse itself if Germany, France and Austria are left using the Euro and to bail out their own banks instead of depending on Greek taxpayers’ to take all the hit for the fraudulent accounting that the government there had used for years with Goldman’s help leading into the crisis?

I sure don’t think so.  Let the euro die — I’ll be a buyer of any future market sell-offs over such fears as they give us the opportunity.

Okay, Cody back in real-time now.

I’m going to do some nibbling on some individual names in our portfolio tomorrow, depending on which stocks open at what prices — I’d like to buy some of our stocks if they’re individually down 5 or 10% in the early trade. Just a tranche or two of course. And I’ll be ready to get much more aggressive if the markets really get hit into next week.

Rather than breathing relief and piling in on top of this big two-day rally...
Stock quick shots
Trade Alert: More longs and shorts + Market analysis
Would rather be short than long GoPro after the IPO pop
Crypto startup, James Harden, Chinese stocks, Sports betting and more