As I get on the 707, ridin’ high I got tears in my eyes
You know you got to go through hell, before you get to heaven
Big ol’ jet airliner, don’t carry me too far away… – Steve Miller Band

I’m in NYC today and tomorrow and headed to LA tomorrow night. I get back home to NM Thursday. Let’s do this week’s Live Q&A Chat at 12pm ET on Friday.

I met with Neil Patrick Harris and his manager yesterday, meeting with Richard Edelman today and then a couple big meetings in LA tomorrow.

As long-time Trading With Cody subscribers know, I am analyzing everything and every meeting and will have some insights for my writings when I get back home later this week. In my trips lately to NYC, Boston, LA, SF, Dallas — all these cities are booming, which is exactly as I’d been predicting for the last seven years of this ongoing cycle. Let’s not pretend that cycle won’t ever change. It will. Let’s be prepared.

On that note, let’s look at some headlines…

Trump faces make-or-break meeting with lawmakers as fiscal deadline looms – How many times over the last thirty years has the media/pundits/politicians promised that the fiscal deadline could crash the economy and the markets? Not much of that handwringing this time, which almost makes me worried in a contrarian kind of way.

Senators Race to Pass Tax Bill by Sweetening Gains for Rich and On Trade, Trump Puts Corporate America First and Senate Republicans’ tax plan raises taxes on families earning less than $75,000 – Look, you guys know I’ve been saying that any tax or other bill that gets passed by the Republican Democrat Regime is going to be full of benefits for giant corporations and the very rich while the middle class and poor will continue to have their share of the tax burden rise and their share of the country’s wealth fall further. So it goes. Whatever form of tax changes get pushed thru by the Republican Democrat Regime currently in power, it will likely benefit the companies that make up our stock markets if not thing else. See this for example: If the Tax Overhaul Smells Fishy, It’s Probably the Samoan Tuna Plant. Read that article and you’ll see that the Republican Democrat Regime wants to send Starkist another $10 million annual welfare check if the tax overhaul passes.

Roark-backed Arby’s to buy Buffalo Wild Wings in deal valued at $2.9 billion, including debt – A few months ago, I had a belly ache after eating at Arby’s for the first time in decades. I do eat at BWW occasionally when I’m on the road, but can’t say I really enjoy their food or environment either. Anyway, this deal values BWW at about the same price it was at four years ago. 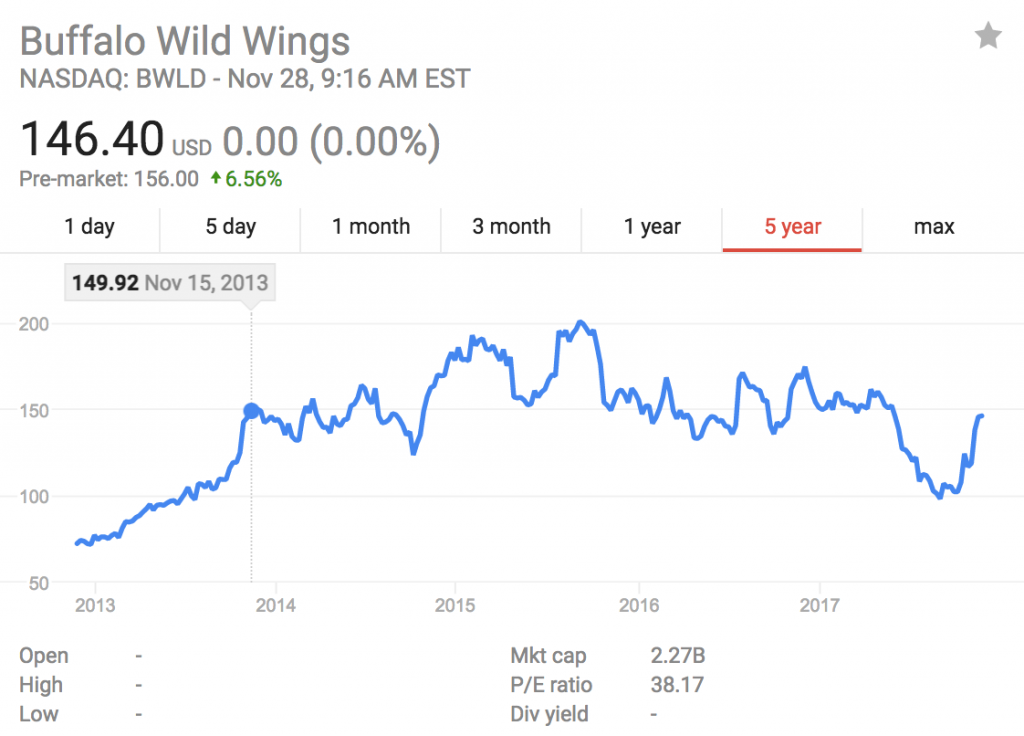 Elon Musk’s SpaceX raises another $100 million in funding – There’s still a lot of money out there, especially for big players and names like Musk.

And a reminder, let’s do this week’s Live Q&A Chat at 12pm ET on Friday.

And as we close out the week, I don't ex...
Market Resiliency, Space Faves, U vs RBLX, And More
Chat transcript from this week: S&P options, Netflix, Corning and more...
IBB tanks and a couple other trading set-ups
Ask me anything at 2pm EST in our weekly chat...