Good Monday everybody. First off a bookkeeping note: We’ll do this week’s Live Q&A Chat in the Trading With Cody Chat Room Tuesday at 11am ET. Don’t forget that I’ll take three or four of the best questions that I answer for you guys in the chat room and expand upon those answers during The Cody Willard Show, my new once weekly 35-50 minute live show that you can find on Facebook, YouTube, Periscope, and Twitter. We’ll be publishing it each week in podcast form on iTunes and Soundcloud. I’ll also send out a transcript of each show exclusively for Trading With Cody subscribers, of course.

Well, hitting the news this morning — what a surreal news conference from Trump and Putin this morning. The markets aren’t reacting much to it though, which underscores how the markets are in a phase of looking past geopolitical news unlike from 2011 to 2016 when every geopolitical headline about Brexit or Greece or Italy or Deutsche Bank would tank stocks 10% in a heartbeat.

I’m not purposely being contrarian about this topic, but just as I was contrarian when I used to often use those short-term geopolitically-driven mini-crashes as an opportunity to buy more of our Revolution Investing stocks and sometimes to even nibble some call options on our favorite names, I’m much more worried about the potential impact and ramifications of the geopolitical headlines here in the summer of 2018 with the Great Trade War of the 21st Century going on and surreal joint news conferences between the two leaders of two of the three (China being 2nd to the US right now, geopolitically-speaking?) most powerful nations on Earth.

I was so confident buying stocks and occasional call options back when the markets would tank over Greece or Brexit whatever in 2011-2016 mainly because I was confident that such random and smaller geopolitical headlines wouldn’t actually undermine The Bubble-Blowing Bull Market we’ve been riding for the last eight years — and now I do think there’s more real geopolitical risk now than in the past eight years. I’m, as usual, analyzing all of this through an anti-partisan, outsider viewpoint, which helps in keeping my economic and market analysis objective.

Anyway, I always remind us that we should always be aware and slowly prepare as geopolitical, economic and stock market cycles change over time.

The set up in the market, the economy and the world certainly isn’t “now” what it was “then”.

Meanwhile, I’ve got a bunch of homework going on a couple potential new names for us and I’m putting the finishing touches on a Latest Positions report with new analysis and updated Revolution Investing ratings for all of our stocks that I’ll be sending out tomorrow.

PS. Here’s a neat then-and-now shot of my beautiful daughter Amaris who hasn’t let Trisomy 13 keep her from being the happiest kid ever. My wife just happened to catch her and me in the same kind of pose three years apart– one three years ago when she was just about a month old and one from this weekend. 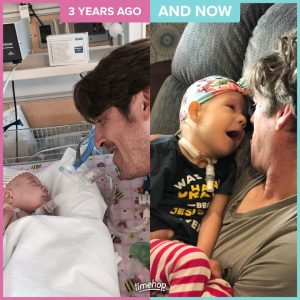 Cody Kiss & Tell: 3-D Printing Stocks, Sitting on FB, and BitCoin is on Scutify
Take the other side of the freak out...
Trade Alert: Locking in some 700% gains in my largest position
Headlines, the markets, our economy and what our playbook says to do about them
Cody Kiss & Tell: Adages, Gaming Expiration, and much more