We have to strive to be objective in our analysis of his tweets, his policies, his propaganda, his head fakes, his MacGuffins (an object or device in a movie or a book that serves merely as a trigger for the plot) and everything else that goes along with trying to analyze how Presidents impact the economy, the markets and the world in the 21st century.

In that vein, I have to admit that I continue to struggle to understand Trump’s motivations. I mean, I can’t really get my head around the motivation behind tweets like this from Friday:

“….My only question is, who is our bigger enemy, Jay Powell or Chairman Xi?”

I mean, let’s remember for one thing that Trump handpicked Fed Chairman Jay Powell. I always assume that our leaders are using their tweets as part of a longer messaging they’re trying to get out to their constituents, so what is the chess-like set up of messaging and policy that Trump’s going for with these relentless attacks on his own handpicked Fed Chairman? He’s looking for a scapegoat in case the economy and markets fail before the election? Probably. And why call China’s leader an “enemy”? To get Xi to realize how serious Trump is about getting China back to the table in a serious manner? Probably.

Or how about this currently infamous Trump tweet from Friday:

“Our great American companies are hereby ordered to immediately start looking for an alternative to China, including bringing your companies HOME and making your products in the USA.”

So are we now issuing edicts by tweet? I appreciate the embracing our modern content distribution platforms, but I’m not sure shooting off Tweets during market hours that include edicts to all “American companies” is how our law is supposed to be implemented.

Oh, then again, as Trump later clarified over Twitter:

“For all of the Fake News Reporters that don’t have a clue as to what the law is relative to Presidential powers, China, etc., try looking at the Emergency Economic Powers Act of 1977. Case closed!”

“The Emergency Economic Powers Act of 1977 law was passed to define and restrain presidential power, which until then had been interpreted expansively under the Trading with the Enemy Act of 1917. It has served ever since as the main source of authority for presidents to impose sanctions on countries or individuals in response to specific national security threats, such as the Iranian hostage crisis that began in 1979.

As of March 1, presidents had declared 54 emergencies under the law, of which 29 were still active, according to the Congressional Research Service. Presidents have used it to target international terrorists, drug kingpins, human rights abusers, cyber attackers, illegal arms proliferators and multinational criminal organizations.

Presidents invoked the law when Iraq invaded Kuwait in 1990, when Serbia sent troops into Kosovo in 1998 and when Russia annexed Crimea in 2014. Among the countries targeted have been international outliers like North Korea, Sudan, Somalia, Yemen, Syria, Congo and Venezuela.

Using it in a trade dispute with a country like China would be a drastic departure. But Mr. Trump could make the argument that China constitutes a national security threat through the theft of intellectual property or its military buildup in the South China Sea.

The Trump administration previewed this view of Beijing in its national security strategy in 2017, which described China as a ‘revisionist power’ that has ‘expanded its power at the expense of the sovereignty of others.'”

Conspiracists who haven’t bought into the Trump propaganda about being anti-conspiracist himself might try to explain Trump’s attempt to crash China’s economy as part of a long-game plan of Putin’s for Russia to gain at China’s expense. At least then you might be able to wrap your arms around Trump’s increasing vehemence against China. Heck, according the WSJ just today, there’s more fuel for that conspiracy fire:

“At a closed-door dinner Saturday evening, the conversation quickly turned to whether Russia—which was expelled from the group in 2014 over its annexation of Crimea—should be allowed to re-enter. The debate turned heated, according to one European official. While France, Germany and the U.K. had resisted Russia rejoining the group, Mr. Trump had called for Moscow’s reinstatement. Mr. Trump’s efforts were rebuffed, and the leaders agreed it was too soon to allow Russia back into the G-7, according to a U.S. official. Mr. Trump later said no decision had been made.”

Then again, here’s an enlightening WSJ/NBC News poll that shows how a slight majority of Trump supporters think that “free trade with foreign countries is bad for America”: 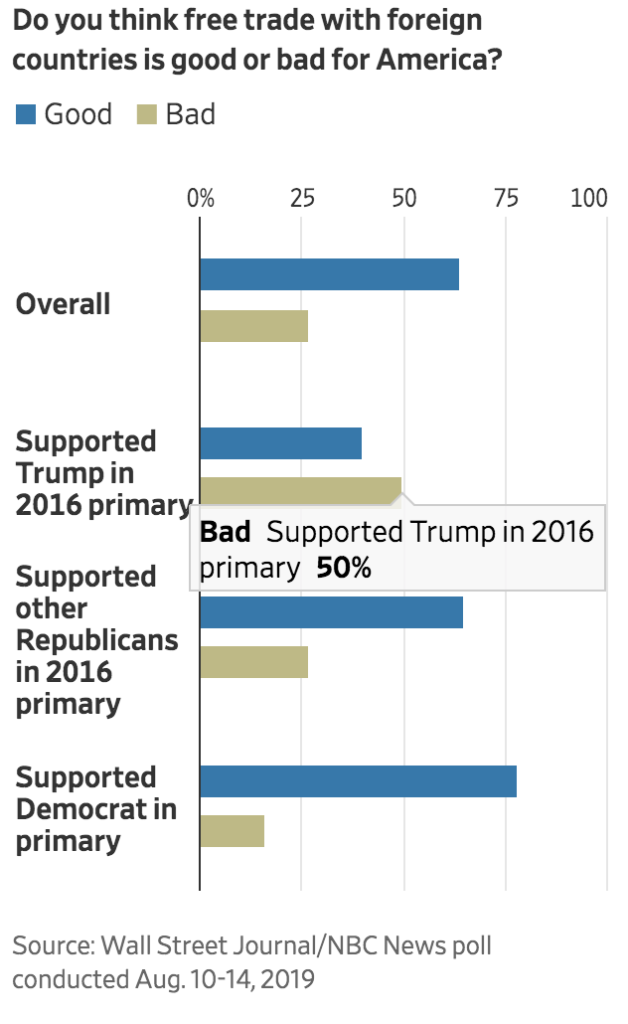 Maybe it’s best to go with Occam’s Razor, and try to understand Trump’s motivations with the most obvious, apparent answer:

Trump thinks he can create an incredible legacy for his Presidency by leveling the playing field for US companies doing business with/in China without crashing our economy/markets and thereby getting re-elected in 2020. Is it that simple? Probably.

Of course, what we’re all here trying to understand is how all this will impact our investments. Is it time to get even more defensive or more aggressive or even — net short?

Short-term: The volatility of the last 3 weeks seemingly wants to build on itself as recession concerns, Trade War headlines, and elevated valuations cause 2-3% market crashes faster than you can say “Trump Tweet Tariff Trade War.” That said, the permabears and shorts are getting cocky already, ready to declare that The Crash is here. Algorithms are exacerbating every mover too. Bulls and longs are starting to get worn down and fear is getting more elevated than valuations. The path of least resistance for the near-term just might be higher, which I’d put at 50% chance that the markets rally 3-5% in the next 1-2 weeks. I’d put the chances of a flattish market at 20%. And the odds are probably about 1 in 3 that the markets tank another 3-5% in the next 1-2 weeks. Best way to trade this analysis? Buy your favorite names and cover a little bit of your short hedges. The more aggressive of you might consider buying both some call options and some put options dated out 1-3 weeks and then trim/sell them when the markets gyrate. I also welcome short ideas from readers — I like shorts that are crappy companies, not just trying to time some pullback in a great company’s stock.

Mid-term: Valuations, with so many growth stocks still trading at 10-20x next year’s sales estimates, regardless of their gross margins, profitability and balance sheets continue to bother me. That said, I do think it’s time to pick through the rubble and look through growth stocks that are down 30-50% and/or trading at/near 52-week lows. You guys know that overall, I try to focus on finding the most Revolutionary companies creating new industries and trying to buy them at reasonable valuations and our existing positions fit the bill. We will clearly have some pain and losses in some of these names if the economy and markets tank, but as I always ask: How low will these stocks actually go and how long will they actually be there? Stay the course, if you believe in the company’s road map.

Long-term: This is what it’s all about. Apple at a $1 in 2003, Bitcoin at $100 in 2013, Facebook at $25 in 2012, Google at $45 in 2004, Twitter at $14 in 2017, Qualcomm at $50 earlier this year, Campbell’s at $30 earlier this year and so on — we have had and we will have more ups and downs, bubbles and crashes and unforeseen swings in these positions over the months and years. And I’ll continue to navigate the ups and downs with some buying and trimming which can help us outperform and reduce risks over the long-term. Like, you know, we’ll follow the playbook as we analyze the trends, the future, the valuations and all the things we do.

Join us for today's live Q&A at 2:00 p.m. EST
Flattish day for the portfolio by the cl...
Revolution Investing Links: Groupon Is Doomed and Hating on the JOBS Act
Earnings Calendar with Analyst Estimates
Today's must-reads