I’ve bet much of my career by utilizing and investing in what I’ve called The Internet Video Revolution for the last fifteen years. Fifteen years? Yes, seriously. Here’s an article I wrote for the Financial Times in 2006 quaintly titled:

Buy into the internet video business while you still can
Cody Willard December 15, 2006

We will look back in a decade and recall that 2006 was the year that internet video went mainstream.

Before you start rolling your eyes and explaining how the $1.7bn that Google paid for YouTube is a clear sign of a new dotcom bubble echoing from the bubbled days of the late 1990s, allow me to point out the difference between the two ages: viewership.

Unlike the video sites of the “Great Dotcom Bubble”, such as Mark Cuban’s Broadcast.com (purchased by Yahoo for a bubblicious $5.7bn back in 1999) which about 12 people anywhere ever used back in the day, people today are actually watching internet video.

Certainly among the internati (my term for those of us who spend hours online every day), 2006 was a huge year for internet video. Our inbox and instant message windows were full of links to funny, shocking, or explicit videos on YouTube, Metacafe, and DailyMotion. We suffered through grainy home video footage, often completely unedited inside of a 3 x 4in screen. Earlier in the year I argued with Larry Kudlow and others on CNBC that millions of people would “suffer” through those limitations and that all of us would quickly become internet video consumers. Tens of millions of us have done so.

And suddenly, just one single little site, YouTube, is showing hundreds of millions of videos – every day. Internet video has crossed the line from being a concept or a promise to being an important source of content, both for entertainment and for information and news. And it is only just beginning.

Nothing drives me crazier than when people point to the huge, early successes of MySpace and YouTube, clearly the respective de facto standards in social networking and in user-generated video, and try to explain that they have “won” the game. Nothing could be further from the truth. YouTube is certainly a home run, but it is a home run on the fourth pitch in the first inning of internet video. YouTube is to internet video as the original three TV networks were to television.

ABC, CBS and NBC are all still around, all still thriving and are worth tens of billions of dollars. But over the past 50 years, hundreds of “competing” channels have been launched, some of which tried to emulate the broad programming content on the big three (such as CW, Fox, and TBS). Others have built their channels around more niche content.

Today you turn on your cable box and have to filter through the hundreds of channels broadcasting video content to you. Even in the consumer-unfriendly format that limits your viewing options to what the powers-that-be choose to force into your living room, there are now hundreds of US channels worth hundreds of billions of dollars in aggregate.

So too will there be hundreds of video sites that will be worth hundreds of billions of dollars in aggregate as the wonders of innovation on the internet push us forward.

News Corp and Google are already monetising MySpace to the tune of hundreds of millions of dollars. Google is going to do the same with YouTube. And as the new video internet sites find their own legs and gain their own momentum and viewership, the monetisation will continue, because the audience is there already. And Google knows how to monetise audience.

That means that any company with a decent brand that generates serious traffic on the internet is going to get bought by Google, or by any of the Google-wannabes who don’t want Google to buy it first. I call this “The Google Put”.

And it is going to help fuel a new boom (and perhaps eventually over the course of the next few years, another bubble) for internet content stocks.

This year was the year internet video went mainstream. And that means that we are just getting started on this movement. In 2007, I expect to stick with both Google and News Corp as two of the best positioned names for this boom.

I also continue to stick with Adobe, as it’s their Flash technology that most of these internet video sites are building themselves on.

The internet video revolution is a growth business. Ignore the shortsighted player haters and buy in while it’s still early.

And here’s an old clip of me explaining the at-the-time still-not-here Video Revolution to Larry Kudlow when I was his sidekick on CNBC back in 2005 or so: 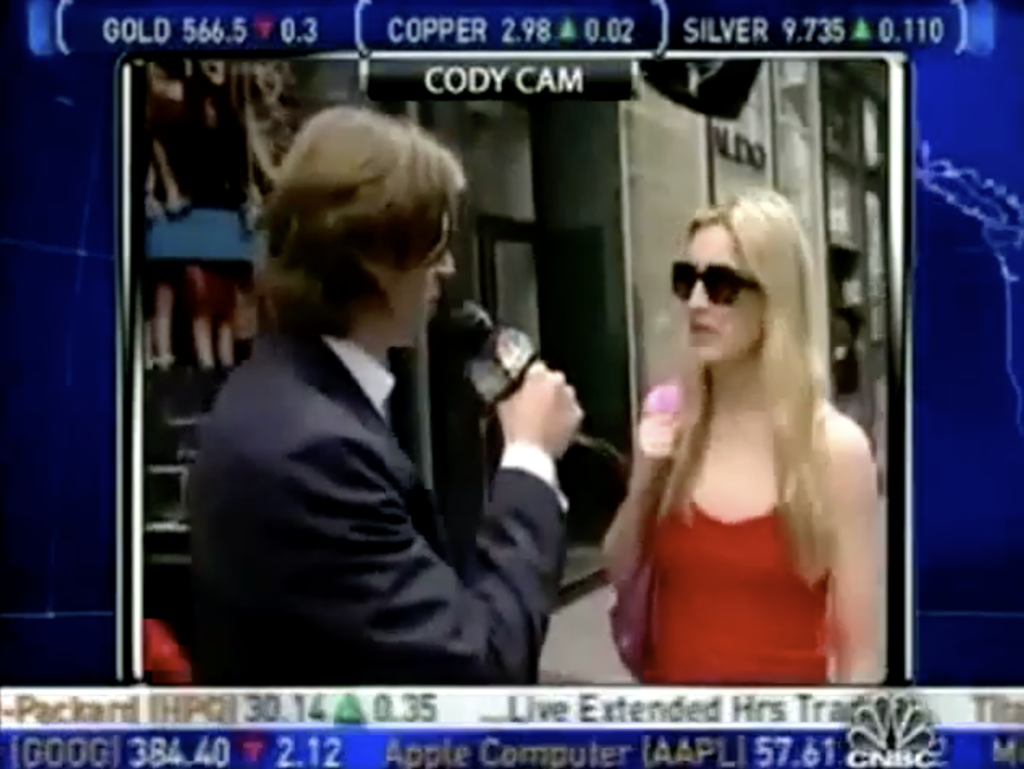 You might notice the prices of Google, Apple and Microsoft going by at the bottom of the video — GOOG is up 700%, AAPL is up 2200% and MSFT is up 600% since that video aired fourteen years ago.

All this to say that, after all these years of waiting for Disney to finally claim their place as a king of video streaming, I’m thinking it’s time to own Disney DIS.

Disney + is a terrible name for the new streaming service but a terrific idea as the company has loaded it with valuable content, both new and old, leveraging the iconic brands that Disney owns and makes billions licensing too. It’s a brilliant business model, really. And by setting the price of its new rather loaded streaming service at about half of Netflix, the company can capture marketshare. Which will likely be quite sticky given the very valuable content available exclusively on the Disney + platform. Just for example, do you remember when most of the most popular Netflix series were based on obscure Marvel superheroes? Disney + also comes with all this (from the WSJ):

For contrast, here’s what paying double what Disney + charges you for Netflix (which I also own and like):

So I like the risk/reward of DIS here. I don’t like the $38 billion of debt, but I think the company can handle that debt, it’s 1.3% dividend yield and invest to win the next phase of the streaming wars. And with their brands, assets and everything else you get with Disney here, I think it’s a name we can basically own forever.

One final note, I do think that AT&T and it’s cumbersome debtload, positioning in 5G and silly HBO Max streaming video offering that won’t even be around until at least next May, is going to be a good short pair at some point because they are set to also lose the streaming wars with this offering:

Join me Tuesday morning at 10am ET for this week’s Live Q&A Chat. Come directly to the TWC Chat Room or just email us your question to support@tradingwithcody.com.