Yesterday, we had a tire blow out on our customized handicap van in the center lane of a six lane interstate of Albuquerque during rush hour on what was supposed to be about a six hour home from a last minute trip to Durango, Colorado over the weekend. Driving six hours with two kids can be a challenge. driving six hours with two kids, one of whom is medically-fragile with oxygen needs, can be a bigger challenge. We had to pull over to the median in a very dangerous situation with trucks and cars blowing by us at 75 miles per hour just a couple feet away.

There’s a stock market analogy and lessons for us here. We might think we have an easy plan, an easy route, an easy way to get to where we want with our money and investments. But we never know exactly what obstacles, hard times, crises or other unknowns will hit along the way. When the obstacles hit, when you’re on the wrong side of the market, you might be scared — but the best way to deal with it all is as directly and emotionlessly as possible. You put things back together, you find solutions to your problems and then you find solutions to the solutions to your problems. You plan for problems and that way you at least have a fighting chance when they do come along. And it’s a long way to where we’re going and whole route to our investing goals will require us stay vigilant.

Yesterday in the hazy heat of the early afternoon, it felt like the wheels came off the van. Hopping out to change the tire in with semi’s making the van shake as they stream by  with both our kids in the van with us, I was scared for our safety and I noticed that my hands shaking for the first time in years. But there was nothing to do but fix the problem, so that’s what we did. We cleared out our luggage and oxygen tanks in the bank of the van to get to the jack and the spare tire underneath and spent the next thirty minutes figuring out where each piece was and what it fit into changing the tire. 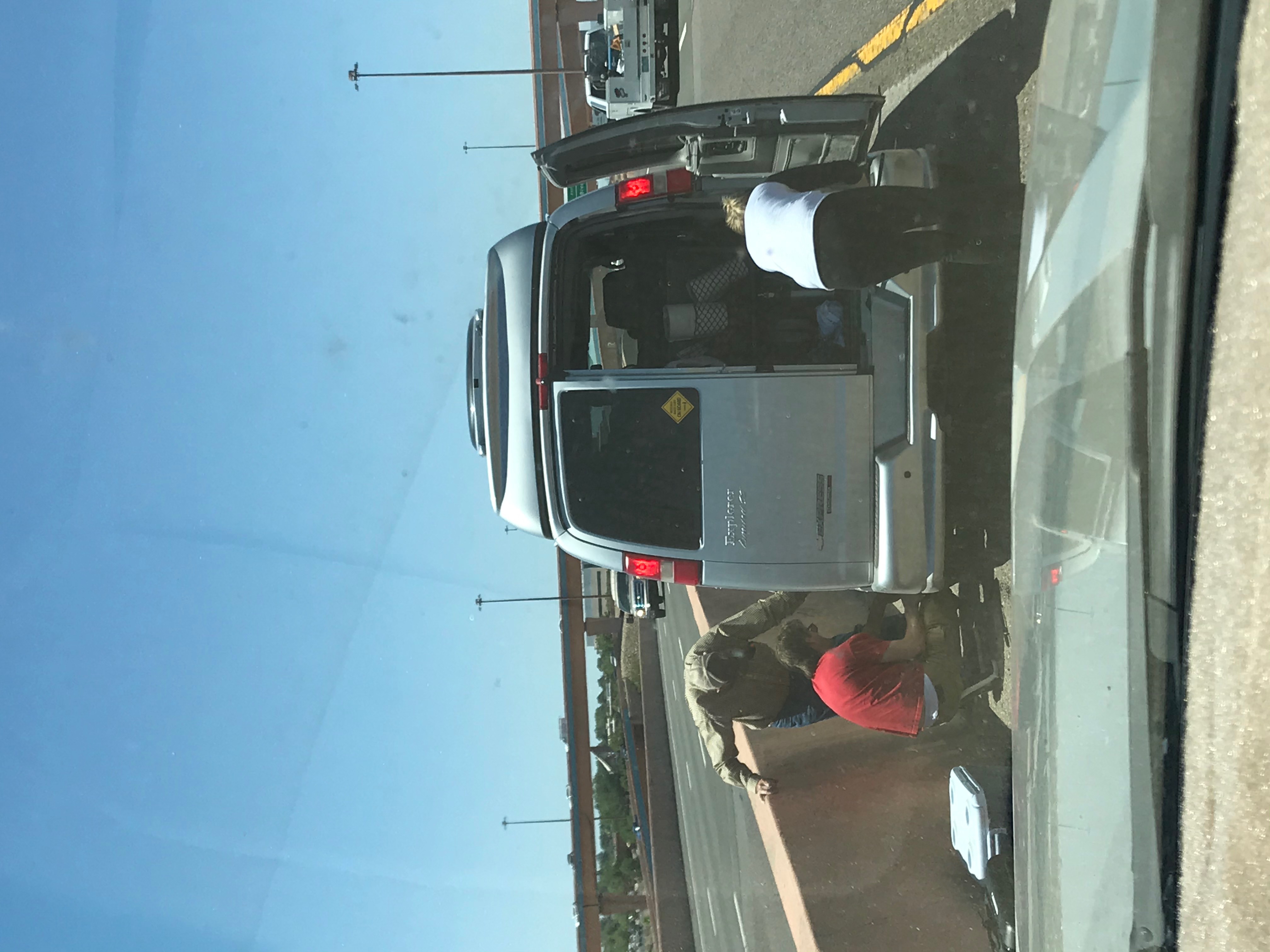 The spare tire itself was almost flat when we got it on the van and the jack removed. So then we had to run into a rough and tumble gas station to put air in the tire. The air pump required four quarters, no other options. So we get change for a dollar inside the gas station and fill the tire with air. Of course, when we go to use our tire gauge to check the pressure, it breaks. But my wife is sure we have one in the safety packet in the van. Turns out the safety packet has just about everything you might need in an emergency but a tire gauge. So we have to buy another cheap tire gauge in the station and stand in line and now we’re an hour or so behind schedule and the kids are annoyed with Amaris fussing and kicking and my wife and I are on edge with hunger setting in as the schedule has slipped.

And for the next three and a half hours, we have to drive ten miles or so slower than we normally do because that spare tire doesn’t look all that good back there, even after we put more air in it. So I look out the window and try to keep a feel of the road to make sure that the spare tire’s not messing up too.

After all that, close to seven and half hours on the road, we are at home unpacked and everybody’s pretty ragged and stressed — but we made it home. And that’s the whole point.

I clearly don’t have all the answers to investing, trading and navigating the markets or we’d all be billionaires together. But I do know the route we’re taking as investors and traders together. And I have a plan to deal with the issues, the crises and the problems that our world, our country, our economy and our portfolios will have along the way.

And that’s why we’re here together — navigating these markets, dealing with blown out tires, worrying about the people flying by us at 75 mph, taking care of our families and getting them where we want to go over time.

As for the economy and the markets, let’s discuss. Here’s how I’m remembering the last few months of our investing trip:

When Covid-19 went hockey stock in March, Trump and the whole of the Republican Democrat Regime agreed to that it was necessary for all but “essential” businesses to shut down, and at the same time they agreed to pump trillions of dollars of stimulus checks and corporate/small business welfare programs and to have bipartisan agreement on trillions of dollars worth of Fed purchases (ie printing money) of Treasuries and corporate bonds in the hopes that the complete economic shut down that Trump and the Republicans and Democrats had agreed was necessary to “flatten the curve” wouldn’t destroy our country’s economy. And then one day the markets crashed and crashed again and again, and eventually Trump flipped-flopped saying that people should “liberate” states governed by Democrat governors (who, to repeat, were basically following Trump’s administration’s protocols) and then it became a partisan issue (of course) and now heading into the election, there’s an awful lot riding on both the stock market and the economy for the election.

But really with all these trillions of dollars juiced into the economy and with the economy/people re-opening, IF the hockey stock doesn’t return, does it matter who wins the election? Heck, is it possible that we are we off to the races in new giant biggest of all-time stock market and asset bubble for the next, say, 3-5 years, no matter who wins the 2020 Presidential Election?

The entire US economy as measured by the GDP was about $20 trillion in 2019 and the entire stock market valuation in the US is about $35 trillion right now in 2020. With the government/Fed just pumping somewhere between $5-10 trillion into the economy with stimulus checks and emergency programs for banks and welfare programs for corporations and so on, you can see how that money could inflate asset prices and unleash speculative fervor. After all, those are real trillions of dollars that have/are still flowing into the economy and stock market and other assets. In other words, the economic looting/stimulating/stealing that the Republican Democrat Regime has done in the name of saving the economy from impact of the Coronavirus Crisis over the last 90 days is equivalent to about 25-50% of the US GDP and about 15-30% of the entire stock market valuation here in the US. It’s sort of scary that we don’t actually know how much or all of the different ways in which that $5-10 trillion has been sent to cronies, voters or corrupt causes.

So perhaps the real question here is how long this can go on? Doesn’t it sort of feel like a lot people buying stocks right now are just doing so because they believe someone else will always pay more for those stocks later? Are people looking at valuations and balance sheets and (more importantly) long-term secular trends and innovation and new trillion dollar markets. How long can this speculative fervor that is driving crappy penny stocks up 500-1000% across all kinds of industries and markets and asset classes last? That’s the big question that traders have to ask themselves here. There are people who don’t even know how to drive flying by us at 75 mph in their cars driving these silly spikes in individual small caps. I don’t want to risk getting slammed by them as I’m looking out over the whole journey.

We don’t have to make a bet one way or the other, if you have a long-term time horizon and you’re being vigilant. We’ve had a lot of stocks just ripping higher since the March lows, including new buys like ZM, DOCU, DVAX, PINS, CRSP along with just about all the longer-held stocks that we added to during the March crashes. But lately, as the speculative fervor has built and valuations has spiked and the economy’s still iffy with lots of risk, I’ve become increasingly cautious and defensive. Of course I’m kicking myself for not having just ridden our longs more aggressively the whole way up from the March bottoms, but I still think we’re going to get some better buying opportunities in many names in coming weeks and months. And meanwhile, I continue to ride our many winners as I drive defensively with an eye on all the tires.

The route to where we’re going isn’t straight and we’re going to have to deal with good times and bad times and blow outs and crying kids and heat and heavy tires and broken equipment and the risks of other people disrupting our path. But as I said, we know where we’re trying to go and we have a plan to deal with just about everything along the way.

How we've made our biggest profits
Trade Alert: Revolution Investing Over The Centuries
Bubble? So what says Google
Let's talk about some important trading strategies that I'm employing right now...
Why we buy vs why we sell: Long and short analysis