Just this morning as I was starting this article, I started by theorizing what it would mean for the economy and stock market if college football was postponed/canceled as was the buzz last night. I got busy analyzing a stock, doing a radio interview where I actually brought this topic up in regards to the stock market, discussing ideas with other hedge fund managers, and other work and by the time I got back to this post, this headline was out:

Big Ten and Pac-12 postpone college football season, will try to play in the spring

And the markets had tanked 1-2% intraday across the board after those headlines hit.

Here’s why…Major conferences/universities directly generate a few billion each from college football and other fall sports for a total of maybe $35 billion in 2019 (up from $32 billion in 2017). 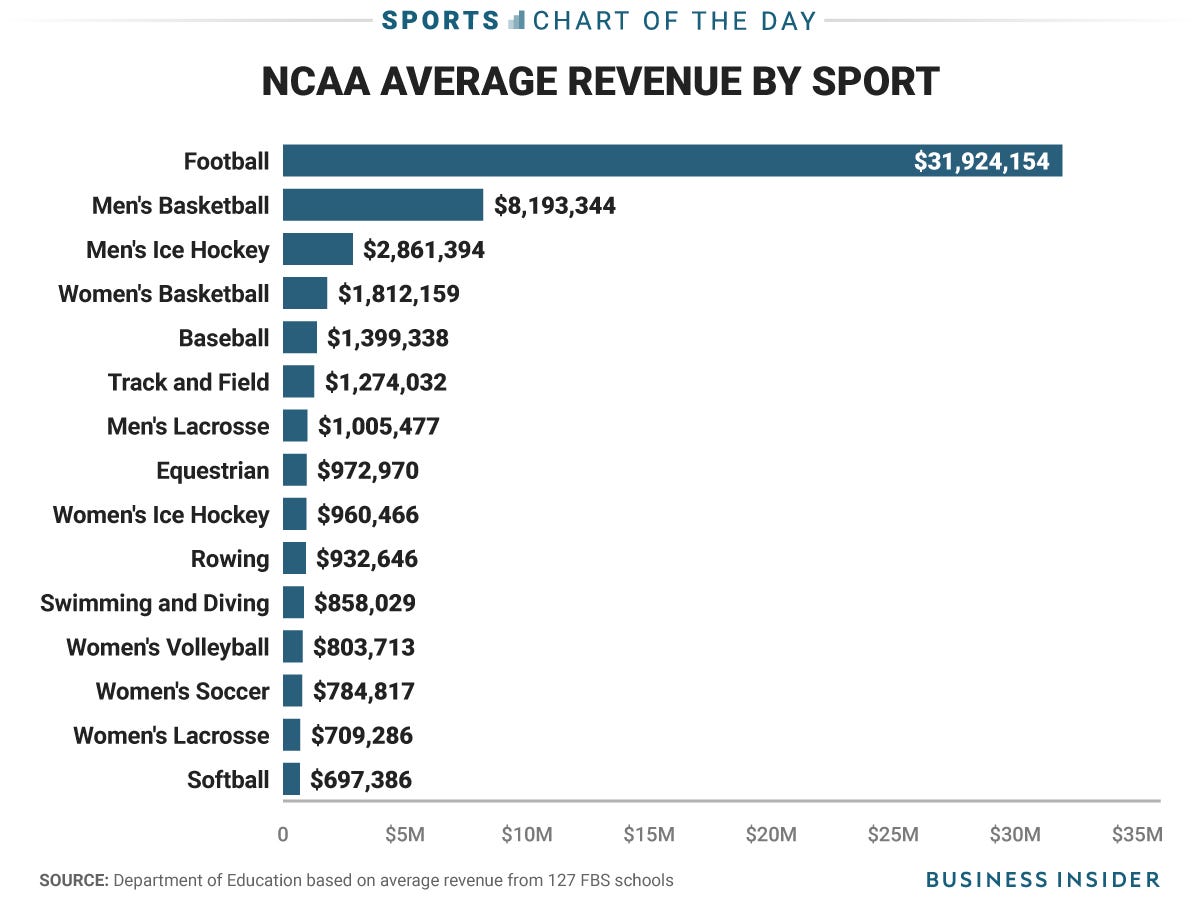 You can probably multiply that by at least a factor of at least two or three to approximate how much additional economic revenue college football generates for related businesses including media coverage, local communities, etc, so we’re talking about maybe $100 billion dollars of economic activity that just mostly disappeared from the rest of this year’s economy. The total US GDP was about $21.5 trillion in 2019, which means that college football probably accounts for nearly 1/2 of 1% of last year’s total economic activity. Because college football falls mostly in the last quarter and a half of the year, that means the US economy just lost $1.50 to $2 out of every $100 that was going to create US GDP for the closing four months of 2020 (because we’re talking about a little more than the last 1/4 of the year, we 1/2% times almost 4).

And of course, if college football’s revenue just disappeared from the US GDP for 2020, it bodes poorly for other economic activity that requires crowds of people to gather. Live concerts, movie theaters, conferences, corporate parties, etc are probably off the table for the rest of 2020 now as college football postponement/cancellation means such a partial shut down is imminent once again. Conferences alone generate nearly $1/3 of a trillion of economic activity per year in the US —  $325 billion of direct spending in the U.S. Of that figure, $120 billion comes from travel alone. Live Nation generates $3 billion sales per quarter.

If college football generates nearly 2% of the US’s year end economic output, , I think we safely assume that we just lost nearly 5% of the US GDP from the best case scenario for 2020’s ending five months from the rest of the industries that probably now have to cancel any business for the rest of 2020 too.

The tech stock market had already started acting toppy as tech stocks had been selling off and underperforming the DJIA, S&P 500 and the Russell 2000 small cap index heading into today and today’s Turnaround Tuesday sell-off on the college football news puts the onus back on the bulls to try to stave off a further fade here. I’m not one to read too much into any one day’s action in the stock market, but if the markets open up big tomorrow and then fade again like they did today, it could be an indicator that this Blow-Off Toppish Action™ that could be putting an end to the Bubble-Blowing Bull Market that we’ve been riding for the last decade is playing itself out.

“Down the street you can hear her scream you’re a disgrace, As she slams the door in his drunken face
And now he stands outside, And all the neighbors start to gossip and drool
He cries oh, girl you must be mad, What happened to the sweet love you and me had?
Against the door he leans and starts a scene, And his tears fall and burn the garden green
And so castles made of sand fall in the sea, eventually” – Jimi Hendrix

Then again…Tesla announces a 5-for-1 stock split after hours and even though that means literally nothing fundamentally has for the company or its valuation or prospects…in a decade-old stock market that’s displaying Bubble Blowing Bull Market Blow-Off Toppish Action™ a 5-for-1 stock split means the stock will likely be up tomorrow. I’ve got a big position in TSLA common from having ridden up since I made it my largest position last year in the $200s, but I wouldn’t want to load up on new shares tomorrow on the split news.

I remain defensive here and looking for better entry points in coming days or weeks or even months. Fast money isn’t the key here. Building and protecting wealth for the the next 10,000 days is the key.

Let’s do this week’s Live Q&A Chat today at 12:30pm ET Wednesday (tomorrow). Come directly to the TWC Chat Room or just email us your question to support@tradingwithcody.com.

There's little action in our stocks toda...
Nice gains in the portfolio today and let's run through the positions that are moving...
Thoughts on RIMM before its earnings report tonight...
Surviving The Crash Brings The Opportunities To Find Stocks That Go Up 100x
Diversifying your puts and an important reality check for an emailer