We added Amazon to the Revolution Investing portfolio in July, despite its triple-digit P/E ratio.  Why?  Amazon As Platform (AAP).  Notice Wal-Mart was the top retailer by searches yesterday, while Amazon was only third—but no one was out looking to buy a “Wal-Mart” yesterday.  They were out looking for Kindle Fires and Kindles.  And the more Kindle products Amazon sells, the more eBooks it sells—for years to come.  And that’s just one form of content; video and other “apps” are becoming available daily.  Then there’s the fact that Amazon is riding the Android wave into billions of hands via Android smartphones and tablets.  Remember last week when we pointed out that about a billion of these devices will be shipping—each year—very soon?

As I wrote in July, “My vision of what Amazon is trying to do is simple: they are trying to be the platform for all things e-commerce. Think of Amazon as an operating system and every brand or individual selling through Amazon as an app.  In ten years I see companies with significant catalog businesses, like say, a Williams-Sonoma, shifting their fulfillment to Amazon… And I love, love, LOVE Amazon’s push into product subscriptions. If you haven’t used it already, pick a product that you buy with regularity, like toilet paper (sorry for that one Mom). Buy in bulk and Amazon matches the absolute lowest-cost vendor out there, Wal-Mart, on the price for Charmin Ultra Soft, Double Rolls, 4 count packs, ($3.36).  And if you consider the scale of Wal-Mart’s retail network and realize what it takes for Wal-Mart to sell toilet paper that cheaply and take a 1% cut, you’ll start to appreciate just how revolutionary Amazon’s platform is.”

So let’s look at the economics of Wal-Mart’s business versus Amazon’s.  We know Amazon hasn’t delivered the earnings per share that Wal-Mart has—historically.  But the cost structures are not as different as you might imagine, particularly given the difference (today) in scale. 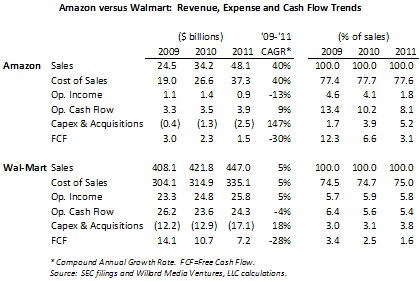 Wal-Mart’s cost of sales—the price they pay for that toilet paper and other items they sell—has been consistently around 75% of sales.  Amazon’s has been consistently around 77%-78%.  That’s not bad considering Wal-Mart’s top line is an order of magnitude higher.  Wal-Mart’s operating income margin is just under 6%; Amazon’s was in the 4% range until last year.  Part of the decline is due to increased investment in technology, which Amazon expenses in its P&L.  Amazon’s spending on capital investment and acquisitions has also risen fairly rapidly as a percent of sales, where Wal-Mart’s has been more or less flat.  And if you look at the trend in free cash flow, both companies have seen declines, as both invested for future growth.  But Wal-Mart’s investment is primarily devoted to additional retail stores.  That’s expensive and depends on continued growth in traffic.  Amazon is investing so that it can help you avoid a trip to Wal-Mart (for the aforementioned Charmin).  And consumers love that, as long as it doesn’t cost more.

So where might these two retail giants be heading?  Today, Wal-Mart’s market cap is just more than twice that of Amazon, and it trades for about 0.6x revenue compared with Amazon’s nearly 2x revenue.  But when you factor in growth, and make a few assumptions, I believe Wal-Mart’s actually the expensive stock. 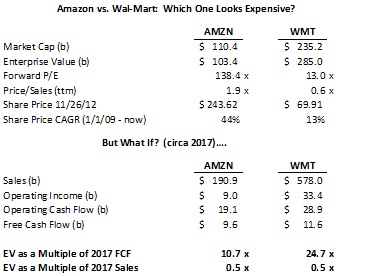 This is a rough exercise, but here’s the logic.  Amazon’s top line has been growing at 40% a year, and analysts expect about 30% through the end of 2013.  Wal-Mart’s growing at 5%.  Push those trends out to 2017 and you have Wal-Mart generating around $575 billion in sales, while Amazon’s pushing $200 billion.  If we hold Wal-Mart’s other margins relatively steady (we actually pushed down the capex figure a little), Wal-Mart might generate about $11.6 billion in FCF in 2017.  Meanwhile, we’d expect Amazon’s cost of sales to fall more in line with Wal-Mart’s 75% as its scale grows.  We pushed its fulfillment margin up a little, as the company has said it will continue to push delivery charges lower, and held other cost ratios within the historical range.  Based on these (admittedly rough) assumptions, Amazon could generate $9.6 billion in FCF in 2017.  If these estimates are in the ball park, Wal-Mart’s trading at nearly 25x FCF while Amazon goes for less than 11x.

This is a back of the envelope analysis, but the implication is clear.  Macro trends are pushing consumers to shop more and more online, and Amazon is setting itself up to be THE online sales ecosystem—for both hard and soft goods like content, whereas Wal-Mart’s is essentially dependent on population growth to keep the business expanding.  When we bought Amazon in July, I pointed out that ecommerce is less than 10% of total retail sales today, while Wal-Mart already accounted for 11% of that total.  As ecommerce grows, Amazon will take a disproportionate share of ecommerce sales.  And all those tens of thousands of Wal-Mart stores may well become less crowded.

Add in the fact that Amazon is set up to become the de facto standard of the Android eco-system – Amazon’s OWN eco-system, partly built on Android tablets and smartphones from Amazon – and you’ll likely see Amazon’s gross and operating margins expand as their subscriber base grows. Is Amazon cheaper than Wal-Mart? Yes, if you believe in an ever-more connected world.

Cody Kiss & Tell: The New iPhone, the LIBOR Scandals, Dollar vs. Dollar and much more…
What the markets are missing about Europe's crisis right now
I first started flagging Adtran for subs...
The Wearables Revolution: The biggest market in the history of the planet
Disruptive and Revolutionary Investment Principles