No trades for me today. Remember to trim a little bit and raise some cash when stock markets are at all-time highs. The S&P 500 is indeed at an all-time high as I type this. Easy does it as we scale in and trim in tranches to spread our risks and profits over time and price.

A couple months ago, I added Sony to the Revolution Investing portfolio. The stock is up about 10% since then and the company reported earnings Friday morning.

Frankly, the earnings report was pretty dismal, but not as bad as most analysts had expected. Long story short, the company’s lost $1.2 billion last quarter and has lost tens of billions of dollars in the last five years. Handset sales have stabilized around 40 million units per year and if they grow at all next year, the company would likely finally show some profits in that division. Music, movies and playstation are booming. TV sets are doing better.

Friday’s earnings report and most analysis around Sony is all about the last five years and the past in general. Let’s look into the future.

Sony’s trying to leverage the huge installed base of Playstation here in the US as more than 25 US  million US households have a Playstation 3 in them and the millions that will be adding a PlayStation 4 to their living rooms over the next year or two. For comparison, Netflix has 30 million subscribers in the US.

Using the Playstation as a platform idea, Sony is likely to roll out a new Internet-based, cable TV killer service that would deliver live broadcasts and on-demand programming to owners of its PlayStation video game consoles and Bravia TV sets. Including smart TV sets and smartphones and other devices, there are now 75 million Internet-enabled Sony devices in U.S. households.

Sony knows they’ve got a tiger by the tail in their huge library of Hollywood-level movies and shows. Distributers like Amazon, NetFlix, Apple, Google et al are desperate for that content and Jack Ma of Alibaba is apparently looking for Sony’s help in trying to figure out how to get in that game too.

Sony’s also got a payment solution coming to Japan, where it will introduce a credit-card sized electronic device that is designed to replace a wallet full of cash cards used by millions of Japanese consumers. The device connects to a smartphone, and allows users to easily buy train tickets or snacks at the convenience store. Whether that device catches traction or not, it’s another step in helping Sony become a wearables play. Sony is also developing “SmartEyeglass,” sort of like Google Glass, you’ll wear them like glasses and they’ll act as a second screen for a user’s smart phone.

And here’s a kicker for you in the near-term. On the conference call, Friday, Sony’s CFO Kenichiro Yoshida, explained how  a weaker yen is negative for Sony as a whole, Yoshida said, with the company losing 3 billion yen (or about $30 million) for every yen the Japanese currency falls against the dollar.

Have you looked at the USDollar vs the Yen in the last few days? 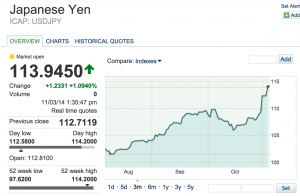 With the Yen dropping nearly 10% vs the US dollar since just two weeks ago, we’re talking about a move from 105 to 113 Yen per US dollar. That’s 8*3 billion Yen, or about $230 million dollars more than the analysis covering Sony are expecting it to earn. Over the next four quarters, we’re talking about a potential of more than one billion dollars of currency effect boosts for Sony’s bottom line. In fact, this math probably makes Sony the single best way to play the strong US dollar vs the collapsing Japanese Yen.  One of the biggest problems with trying to invest in foreign companies is currency fluctuations, but for now these currency fluctuations look like they are about to really work in Sony’s shareholders’ favor.

Why the Apple Watch is just the beginning
Of politics, markets, immigration and scaredy cat hedge fund managers
Only 22 spots left, so sign up now if you're going to watch me at the Trader's Expo
The Cloud is dead; long live The Cloud
Looking Back At A Crazy, Stressful, Profitable Year