Codywillard: Howdy folks, Personal note: I’ve been back and forth to Albuquerque quite a few times in the last few weeks with my wife and our soon-to-be-here baby girl, Amaris. Every check up for the last couple months has been full of good news about her health and outlook. Amaris will be here in the next couple weeks. We are so excited to welcome her into the world. Let’s get started early on this week’s Live Q&A Chat. Ask me anything:

Q: Do you think that any of the stocks in the security basket (panw,f5,splk) is/are overbought right now?

A: Of the three, I would think that maybe $PANW could be considered overbought. But it depends on the time frame of “overbought”. The one month PANW chart definitely looks overbought, but the one year chart doesn’t but the five year chart does. I’m just holding my PANW steady for now.

Of the three, I would think that maybe $PANW could be considered overbought. But it depends on the time frame of “overbought”. The one month PANW chart definitely looks overbought, but the one year chart doesn’t but the five year chart does. I’m just holding my PANW steady for now.

Q: Do you feel $GOOGL will make any new inroads as their search business gets potentially weaker as more and more apps are steering people away from the net as they go right to the apps from the companies they like and use?

A:  Google’s future rides on Android becoming the dominant operating system for wearables and the Internet-of-Things. Search is not going to be a growth vehicle for Google over the next few years.

Q: In light of the $AAPL Music announcement what are your thoughts on adding to our $P short while the stock price is still up?

A: Not sure I’d call $P‘s price “still up” as it’s down 10% or so in the last month. I am indeed considering adding to the $P short, but not going to rush it. Would like to do it on a pop and/or after a few more days/weeks of time. 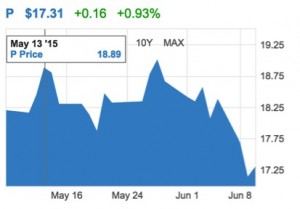 Q: When I mentioned $P “still up” I was comparing it to the original entry position. The close on April 13, our entry date, was $17.11

A: Fair enough. I’d like to add to the $P short position, but just haven’t yet.

Q: What has been your thoughts on $WFM recently?… Has your analysis changed the retailer for the producers in this healthy consumer trend? I mean buy $HAIN or $WWAV … I really have concerns on competition in the retailer arena. As consumer, why to go to WFM just for organic product if now I can go to Walmart, Cosco, etc and have thouse kind of food and the rest of stuff I need for my home?

A: I’m hearing a lot of skepticism about my $WFM long position and I am listening to it. On the one hand, that kind of skepticism makes me bullish. On the other, I think I should remember that $WFM is a grocery store company, and it will not trade or have fundamentals anything like most of our tech and other Revolution Investing stocks. I’m sick of looking at $WFM go down and its back to where I first bought it and I’m frustrated about that. Emotions are the enemy though, so I’ll step back and try to re-analyze the earnings potential and valuation potential for this stock and then let you guys know what I do.

Q: Have you tested periscope? What do you think on this $TWTR app and its potential for the stock?

A: Yes I’ve tested and been very impressed with how easy Periscope is to use. I’ve written about it extensively for you dear TradingWithCody subscribers already:https://tradingwithcody.com/201… In regards to Twitter — their new Periscope app (https://www.google.com/#q=peri…) is a Live Video Streaming apps….which is what I’ve been saying would be HUGE. The Periscope app is also the incarnation of exactly what I’ve been saying is what GoPro GPRO was supposed to “pivot” into. GoPro, as I’ve said all along, is a hardware company, not an app company and they seem to be missing the App Revolution. Meanwhile Twitter is an app-first company, and the new Periscope is exactly what I was talking about here in this “3 growth industries revolutionizing the world” when I wrote: “You’re going to see kids wearing HD camera recorders in their hats, sunglasses, clothes and accessories and streaming their lives up and down the Internet. You’re going to see people wearing displays and talking to themselves as they engage with their smart devices. Imagine your smartphone becoming a hub that controls your wearables and connects them to the Internet. Revolutionary on a global scale.”

Not a fan of $GPRO and the decisions they’ve made about what companies they buy and about raising money for the $GPRO balance sheet (or lack thereof) after they’ve gone public.

Q: When you talk about re-analyzing $WFM‘s valuation what sort of analysis are you doing? Are you projecting growth in a discounted cash flows model? I’m interested in the metrics you focus on and the process you go through in to come up with valuation

A:  Let’s start on this $WFM analysis together then. First, let’s look at the analyst estimates: http://finance.yahoo.com/q/ae?… Revenue growth is expected to be about 10% per year as it has been for a couple years. EPS is expected to be about $1.70 this year growing to about $1.90 or so next year. Let’s assume my bullishness about the company’s prospects over the next year is right and that they earn over $2 per share and are on track to earn $2.25 or more per share the next year. At $40 per share, that’s about a 17 P/E ratio and we’re paid a 1.3% dividend yield to hold it in the meantime. I’ll do some more on this and let you guys know.

Q: In your estimation how many years away are we from 1. Self-driving cars being truly used by individuals and 2. Are electric cars the vehicle of the future in terms of their source of power?

A: 1. We are between five and ten years before we start to see self-driving cars on our roads regularly and even then it will be a small fraction of total traffic for several more years or a decade after that, I’d guess. 2. Electric cars are probably better for the environment than gas-powered cars, but solar and/or other energy that is generated on the car itself is probably the future.

Apple and the markets disconnect. Or do they?
Cody Kiss & Tell: TradingWithCody Apple, Pandora, Silver and much more. July 15th, 2015.
Cannabis Cryptos Craze Creating Coming Crash
Sold news, spiked emotions and Deep Thought of the Day
I added to my Lender Processing Services...