For a year or more now, I’ve not mentioned precious metals, gold and silver, except to answer questions from you dear subscribers. Such questions and my answers have typically gone something like this, as I’ve been waiting patiently for better pitches.

Q. Cody, What do you think of gold and silver as investment vehicles?

A. Having a few gold coins hidden somewhere, maybe having 5-10% of your long-term money in some gold coins and bullion and precious metals is probably a good idea in world of unethical, corrupt and greedy politicians, bureaucrats and other scammers have access to borrowing trillions in your name.

For the last week though, I’ve gotten several emails and Scuttle questions that totally underscore the widespread fear in the silver and gold markets right now. Here’s one from this weekend:

Q. I am stuck holding silver , and wonder would selling at a loss and getting in something that could make it back quickly is advisable. I am Ruidoso native, small town guy, not a very sophisticated investor. Can you help?

From a contrarian stand point, I’m not sure I can remember gold and silver being this widely hated and feared and shorted.

Take a look, for example, here at this chart of silver right now that shows how real life professional money managers are shorting more silver ounces than ever before: 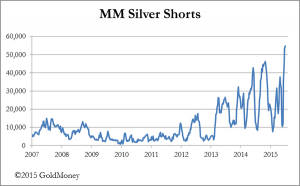 I’ve never been a permabull on $gold — in fact, here’s me getting short gold and sliver back in 2011 when gold was at $1700 an ounce and $silver was in the $40s in an article called “Time to short Gold and Silver”

Here’s how I explained it at the time:

“I’ve been waiting patiently for gold and silver to start their ugly topping process on what I believe could be a blow-off top for their prices that is exhausting itself before our eyes. Here’s a five-year chart of silver: 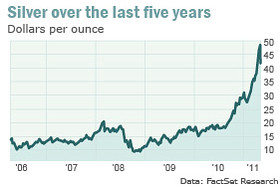 Blow-off top anybody? Here’s a long term chart of gold: 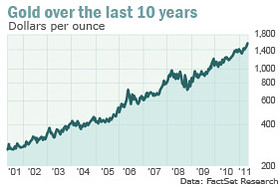 It seems like I’ve seen a ten year chart like that somewhere before…hmm, let’s see what the Nasdaq looked like as it headed into its blow-off top in the year 2000: 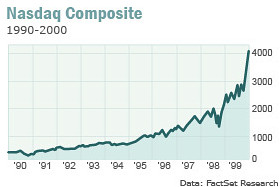 How did the Nasdaq perform over the subsequent couple years from that top, say from 2000 to 2003: 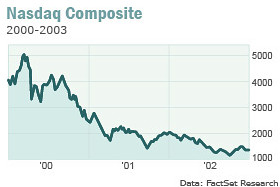 Everywhere I went in the late 1990s, people would ask me about tech stocks.  Nowadays, whether I’m on a panel or whether I’m talking to the lady at the local print shop who’s helping me design my new business cards or whether I’m at lunch with my 72-year old retired high school senior English teacher, the first question out of anybody’s mouth when we talk investments is: ‘What do you think of gold?'”

So we’ve just about come full circle now, as people here in my hometown are now asking me about how to sell their silver and gold. Not to mention that silver’s chart for the last four years since I recommended getting short silver did just about exactly follow the Nasdaq dot-com bubble crash: 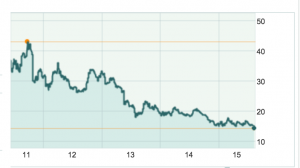 I think silver and gold, silver more so than gold, are set up to really higher for the short-term and for the long-term. If you’re a trader, I might look at buying some SLV call options dated out for the next two to three months. And if you’re a long-term investor, I’d suggest nibbling on some silver coins and bullion that you can keep forever.

And as Michael Haynes points out on Scutify: “The ETFs in these precious metals paints the picture (below) as free market money takes a position. Physical Silver in the current market is trading at premiums over spot that are at or over yearly highs. The US Mint has stopped delivery of the Silver American Eagle due to supply chain issues.”

I’m buying some SLV call options dated out into September and October with strike prices ranging $14-16.50. It’ll be a very small overall position for me but using the call options will give me some juice if SLV/Silver do rally in the near-term. I’m also ordering a few more silver coins from my dealers.

Trade Alert: Culling the portfolio (and the chat made me uncomfortable)
Trade Alert - Learn from my mistake as I cover JPM
(Very Speculative) Trade Alert: The Helium Network
Trade Alert - Partial tranches (and what happened during the Live Q&A yesterday)
Latest Positions: The Cloud Revolution Stocks