I wish I saw the kind of opportunity in one of our stocks that I saw when Google was back below $500 and I kept buying more and writing about it. This is one of those times when I keep saying to wait for the right pitch and to look for new names. Stay tuned on the new names front — I’ve got one I’m ready to nibble on this week. Writing it up as I do my final analysis on it presently.

We don’t have to nail every bottom and every top. Indeed, nobody does and those who try to do so, especially in cyclical stocks/sectors never make money over the long-term. How many gold bugs and “peak oil” analysts/investors/pundits look like fools right now? All of them, I think, no?

For the last twenty years or so, I’ve mostly steered clear of oil and energy stocks because the sector, as I’ve explained on RealMoney many times in years past, is just too cyclical to invest in for the long run. Every ten to fifteen years or so, energy prices rally big and every energy analyst starts talking about “Peak Oil” or whatever justification they have to explain how the cycle is somehow going to play out differently this time just as the cycle tops out. And then oil crashes as production skyrockets. 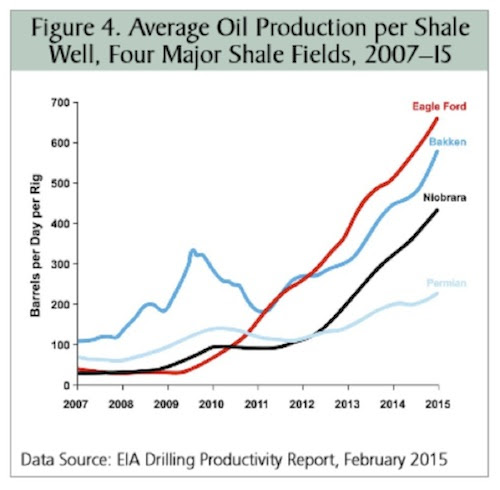 That means, as John Mauldin points out, that production in those shale wells are up 1000% in eight years.

Eventually, the sell-off in energy gets overdone on the downside, production gets gradually reduced, consumption of energy rises over time with the broader economy and — voila, the cycle bottoms out.

I grew up in a tourist town in southeastern NM and I’ve seen this energy cycle play out probably five or six times in my lifetime. This time will be no different.

Oil, natural gas, coal and other old world energy sources are cyclical and always have been and probably always will be. The one part of energy that is different today than ever before is the fact that renewable energy sources, namely solar and wind, are not as dependent on the broader energy cycle and are getting cheap enough to truly impact demand for the traditional old world energy sources. Solar in particular is driving this secular (rather than cyclical) change in energy production prices. 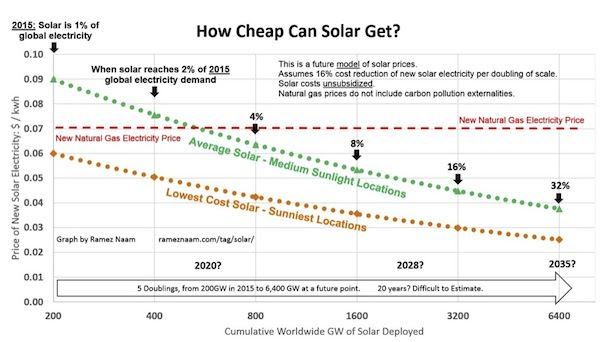 I was a long-time bear and short on the alternative energy sector before I “Flipped It” and turned into a bull/long, covering my shorts and investing in First Solar a few years ago when a wave of bankruptcies in solar/alt-energy hit. I still own my First Solar stock and plan to own it for many years to come regardless of what happens to the broader energy sector and oil/natural gas prices.

I like being a contrarian though, and with the collapse in energy prices and energy-related stocks, I’ve been spending a lot of time looking names like Freeport McMoran and others in the traditional energy and commodities sector. And I see two major problems for them near-term that keeps me from buying any of them. Firstly, natural Gas and oil need to rally 30-50% before the major energy stocks would actually benefit much. And secondly, their balance sheets are mostly wrecked with huge debt and little cash.

FCX, for example, has $18BB debt and less than $1BB cash. Their balance sheet leaves them very little room to wiggle
any financial downturn at all and the banks will cut off the cash. Chesapeake has $11BB in debt, making it an ugly balance sheet. One of the most dramatic drops in the commodity sector is probably $BTU Peabody Energy.

Why these companies didn’t do some secondaries back when their stocks were in rally mode, up 500% from their lows and worth tens of billions of dollars, is beyond me. But it’s too late now. FCX filed to do a secondary with their stock down 90%. I guess that’s better late than never. But all this reminds me of $JDSU, which, like BTU, is down 99% from its highs. Why don’t these companies ever do 10% secondaries when they are worth tens of billions of dollars so that they give themselves a few billion dollar safety net? $BTU was worth $20 BILLION! It’s now worth $372 million. They could have raised $2 billion doing a secondary when times were good.

Debt and dependence on a higher commodity price in a down cycle is not a good idea and not a good risk/reward. For the last six months, I’ve told all my subscribers and followers on TradingWithCody.com and Scutify to just stay away from energy. You don’t need to nail the bottom in that cycle, which could very well take several more years to play out. As I’ve been saying for my entire career on Wall Street – sticking with secular growth in revolutionary technologies is a much easier game to play than trying to nail cyclical tops and bottoms.

You might have read me explaining this logic before:

If Donald Trump and his son were men of their words, I’d right now be about to inherit all of Donald Trump fortune when he passes. You see, I once bet Donald Trump Jr that oil would see the $30s before it would see $150s as I hosted a nationally-televised two-hour block party on Wall Street in July 2008. Oil was at $130 on its way to $147. The bet? Each of our respective inheritance against the other’s.

Two months later oil was at $33. Donald Trump Jr refused to ever come back on my show! For the record though, he was a gentleman and his sister was the first ever guest on my TV show and she was smart, friendly and engaging.

Eventually, perhaps when a spate of bankruptcies finally hit the energy sector, there might be a clear bottom being put into the traditional energy sector. Not that that you have to nail that bottom either though. Let it play out. Don’t be a hero with your money.