The Great Trade War of the 21st Century is in fool, er, full bloom. And nowadays analysts and companies don’t ponder if the Trade War is “real” (instead of trying to explain that it’s a “not a trade war”).

At the time, back three months ago, I wrote, “If Tim Cook thinks he can predict what will and what won’t be affected by The Escalating Global Trade War, he should go watch Fog of War. Collateral damage, friendly fire, unintended consequences and other nightmares of war strategists are bound to have their financial parallels in Trade Wars. It won’t be this year, but who knows what will be targeted and affected by The Escalating Global Trade War in coming years.”

Fast forward and sure enough, on Saturday Trump tweeted: “Apple prices may increase because of the massive Tariffs we may be imposing on China – but there is an easy solution where there would be ZERO tax, and indeed a tax incentive. Make your products in the United States instead of China. Start building new plants now. Exciting! #MAGA”

And sure enough, now Apple’s singing a different tune: “It is difficult to see how tariffs that hurt U.S. companies and U.S. consumers will advance the Government’s objectives with respect to China’s technology policies,” Apple said. “We hope, instead, that you will reconsider these measures and work to find other, more effective solutions that leave the U.S. economy and U.S. consumer stronger and healthier than ever before.”

I trimmed some Apple last week as I do occasionally as I’ve owned Apple stock for many, many years. I occasionally buy some Apple shares back when the stock crashes, too, of course.  Point being that I’m not saying Apple’s doomed because of The Great Trade War, but I do think there’s a lot of “Fog of War” and friendly fire and other unintended consequences that can impact Apple’s share price, the stock market and the economy.

There are many multi-billion dollar decisions about where to build factories, where to source supply chains, what demographics and geographic areas to target and so on that are being made right now. Or more accurately perhaps, some of those decisions are being delayed and some of them are being changed right now, in large part because of The Great Trade War.

Meanwhile, the stock markets, and Apple, continue their upward ascent, which raises risks of more downside if/when the world panics about Trade Wars, Real War, or something else at some point, perhaps sooner rather than later.

Before I move on, I thought I’d mention that I’ve been doing some work on CBS as a potential “content is king” contrarian kind of play. The stock is cheap on a lot of metrics, especially relative to other content companies. CBS is trading at just over 1x sales and at less than 10x next year’s earnings. The company is growing revenues at just about 5-10% per year right now (boring!). But maybe if the board can hire the right CEO that could take this company into the digital age finally (20 years late, of course).

Then I start looking at the board and thinking about this:

More perspective: Les Mooves is going to get more than $100 million for leaving CBS. That’s about 1/2% of $CBS’s market cap. That’d be like Apple giving Tim Cook $5.5 billion in a severance package — And remember that CBS’s board is going to pay Moonves for leaving in a scandal!

And why haven’t they already fired Moonves for incompetently handling the Internet Video Revolution and instead of celebrating him for being #1 in a dying broadcast network. Millennials in Europe haven’t never even heard of CBS. But they certainly have heard of Netflix!

Here’s an old article from 3 years ago that was shocked when “Netflix is now bigger than CBS: 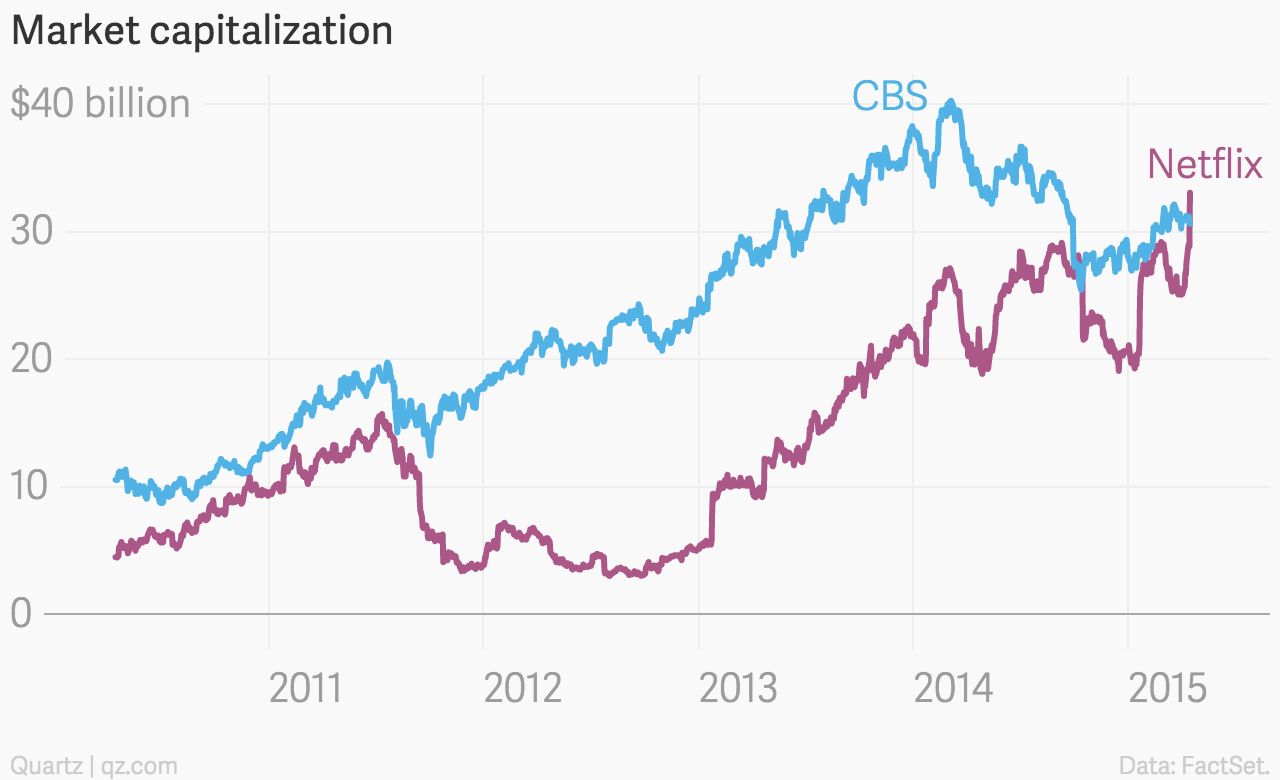 Less than 1,000 days later and Netflix is now worth more than 8x as much as CBS.

Meanwhile, CBS and their board are happy about how they’ve spent a decade green lighting non-threatening procedural dramas and lukewarm Chuck Lorre leftovers.

Which left me to conclude: CBS and their board are idiots. And I’m not buying the stock until they’ve been cleared out. Next!

I’ll see you all bright and early in chat room tomorrow (Tuesday) morning at 9am ET for week’s Trading With Cody Live Q&A Chat. I’ll also take questions over the phone on our conference call line (Dial-in: 641-715-0700 Access Code: 709981), in the Trading With Cody chat room or just email us your question to support@tradingwithcody.com.