Consumer Reports has been bashing Tesla for the last few months, and the lack of rigor in their analysis has made me cynical. So I dug into CR’s supposed objectivity and consumer advocacy. And I didn’t like what I found, as it confirmed my suspicion that CR is not even trying to be unbiased in their car review business.

For a little background, according to Wikipedia, as recently as 2012, CR‘s website claimed that, “CR accepts no advertising, pays for all the products it tests, and as a nonprofit organization has no shareholders.” (Citation: “Our Mission”. Consumers Union. Retrieved 27 September2012.)

CR‘s website no longer mentions anything about advertising, but if you click a few links on the site you quickly find this to confirm that CR is not biased and is even selling your data in real-time when you visit their site: 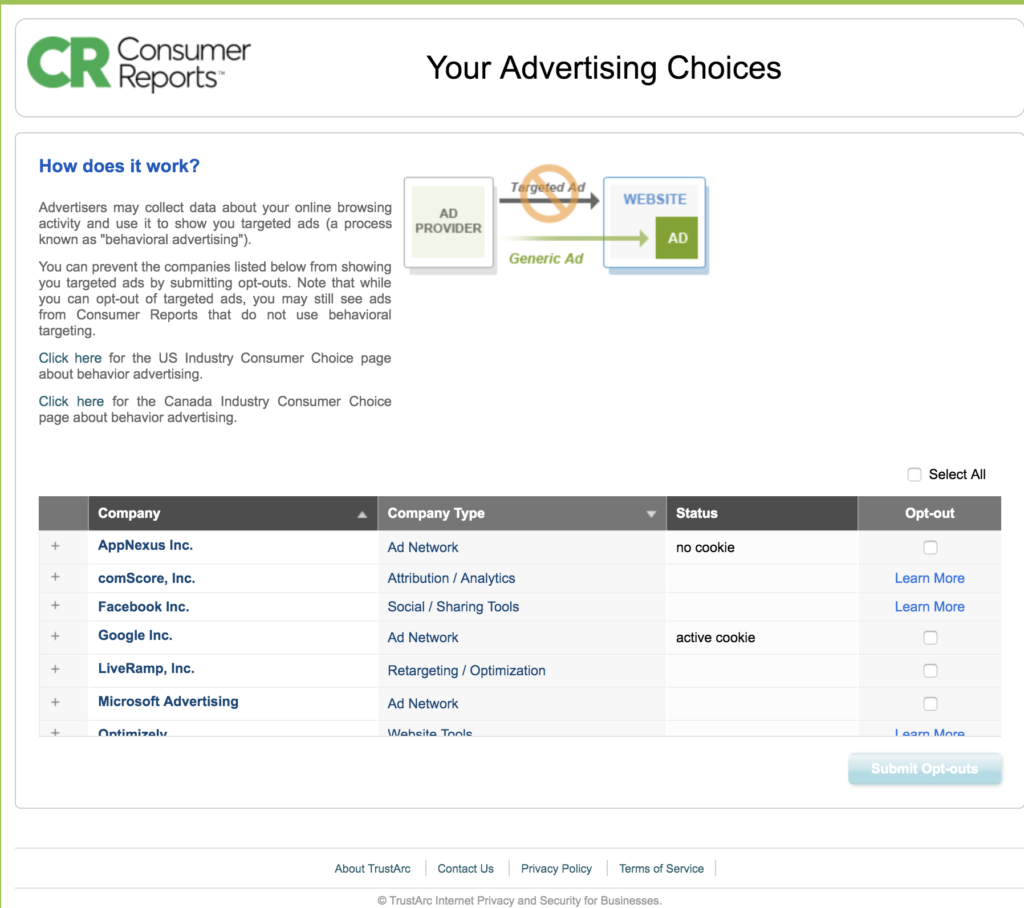 CR’s site will tell you that “As a nonprofit organization, Consumer Reports works to be as open as possible in its financial disclosures and operations and in maintaining its independence and integrity.” Read this report from the the UK’s Information Commissioner’s Office for more on what these ad networks are doing with your data. That sentence about CR working to be open in its operations doesn’t really hold up underneath that screenshot and that report, does it?

The hypocrisy about their selling your data to several advertisement platform providers that use your data in ways that are clearly not good for the consumer gets worse when you realize the company literally promotes Data Privacy as one of their two “Priorities” on the site:

“When you shop for, purchase, or use a product or service, your private information may be collected, bought, or sold without your knowledge or consent. That’s why Consumer Reports is working to help you take charge of your personal data.”

But let’s get back to the car review business that’s so clearly the most important part of Consumer Reports‘ business, as they advertise it every chance they get:

So here’s Consumer Reports trying to scare people about the wondrous Tesla Autopilot system in a recent YouTube video.

And here’s a rebuttal to that video you should watch instead of that video.

Let’s keep going here, as I came across this tweet today that further exposes the ridiculous bias that Consumer Reports has to promote non-Tesla cars in their car reviews: 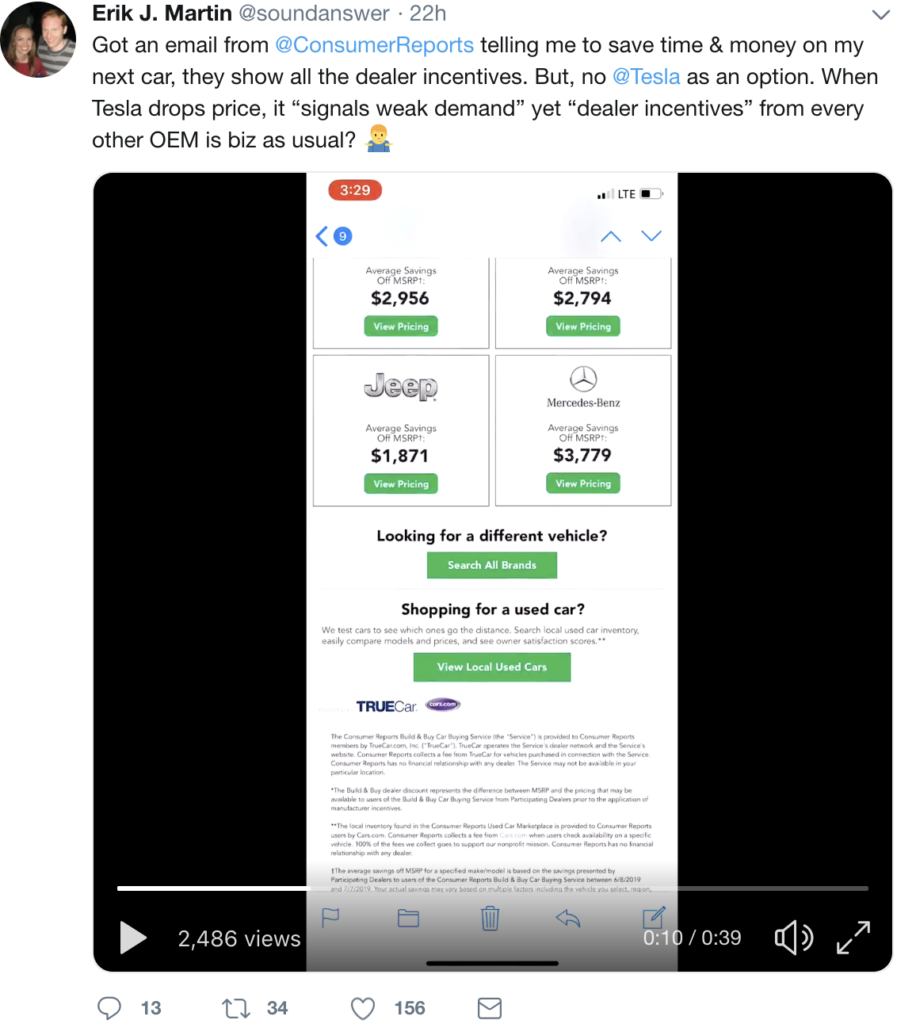 Let’s zoom in on that fine print underneath those logo advertisements from non-Tesla-car-selling car dealers from this non-profit that’s supposedly all about “truth, transparency, and fairness.” 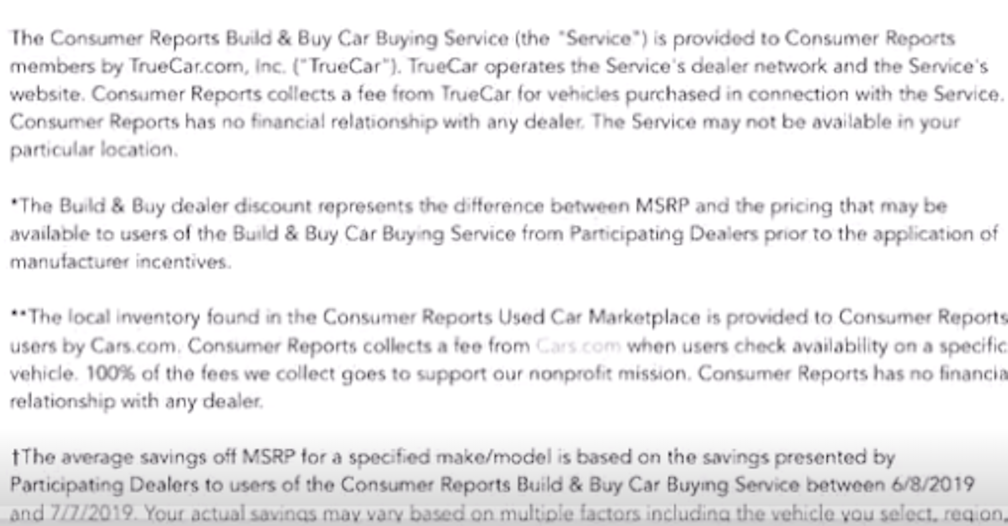 There’s even more conflict of interest that Consumer Reports wants you to ignore, of course. Did you know that Consumer Reports also has a TV show on NBC and Univision that…has advertisers? Who do you think Consumer Reports and NBC are trying to sell their ad inventory to? Oil companies and car companies not named Tesla, that’s who. Remember that Tesla spends no money advertising on TV or in print or just about anywhere else, while the oil and car companies spend between $1 billion and $10 billion each every year on trying to dupe people into buying their products.

I know, as a frequent new car buyer, that the Tesla Model 3 is the best car in the world (that’s not a Tesla Model X or Model S). Any objective reviewer would tell you that the Model 3 insanely cool, fun and Revolutionary and that the Tesla Autopilot is amazing and helps you be safer on the road.

Yes, I’m an investor in TSLA, which you could argue makes me biased too. Then again, I would be ruthless in selling my TSLA stock if I didn’t think the Tesla Model 3 is great — remember that I own TSLA stock in the first place, starting earlier this year, because of how amazing I found the Model 3 to be.

My family had a subscription to Consumer Reports when I was a kid and up until I figured out how stupidly biased Consumer Reports and their analysis really is putting together this report, I still had a lot respect for their ratings. No longer. Indeed, I’ll roll my eyes anytime I see Consumer Reports‘ name for the rest of my life.

As for Tesla here, it’s clear that the Model 3 is Revolutionary and it’s clear that it’s catching global traction. We’re still not out of the woods with this stock yet, as the company needs to continue to build quality cars and consumers/businesses need to continue to clamor for these cars if this stock is going to work long-term. You might want to consider trimming 5-10% after this 30%+ rally in the stock from the recent lows. I’m going to trim a tiny bit myself here above $250 today.

“To achieve our mission, we also work with experts, companies, advocates, and institutions, screening and securing partnerships that work for consumers and meet our high standards. From time to time, Consumer Reports partners with outside organizations to deliver additional services and insights to our members. We combine these services with our best-in-class consumer-education resources to provide consumers with essential guidance and information, always making clear what is being provided by one of our partners.”

What a bunch of hypocritical BS.

Let’s leave on this note instead. How cool is this Radio Flyer Tesla Model S for $500? 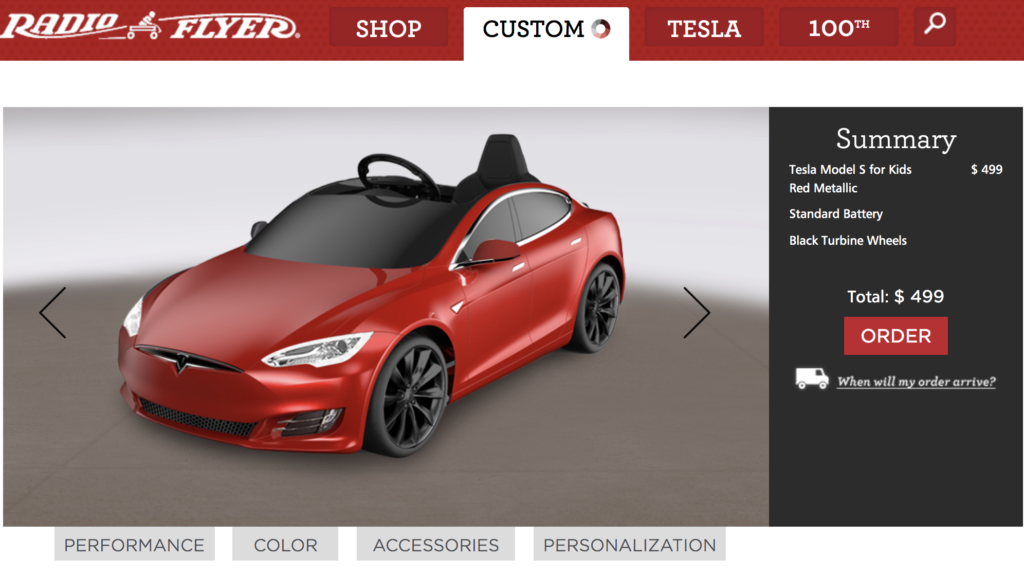 Don’t forget that we’ll do this week’s Live Q&A Chat tomorrow morning at 9am ET in the TWC Chat Room or just email us your question to support@tradingwithcody.com.

Trade Alert: Take some profits into the euphoria
Why Apple should buy Blackberry, Did Instagram kill Snap AND Did Alexa just kill the App Revolution?
Trade Alert - Get your bucket out in the $80 trillion river
Trade Alert: And The 5G Revolution, Trillion dollar market caps and more
Cody's Trades of the Week for February 20-24, 2017