Q. Cody, even though the S&P is near a record high, there is a lot of carnage underneath in growth names. but there has been a bit of an improvement there recently and traditionally the end of the year is a good time to be an owner of stocks. I am guessing that you would say that the hit to the “growthier” names is deserved because of overvaluation, but are you generally pretty bullish here, despite all the various known problems? Any interest in NOW, now that it is way down?

A. Yes, I’d say I’m still pretty bullish about the markets here and I’m not aggressively adding puts and hedges or selling down my longs or anything like that at this moment. But neither am I chasing much right now. NOW is a great company, huge gross margins, profitable, growing 30% per year topline — but it’s still too expensive for my tastes here. Maybe below $200, I’d get interested in buying some.

Q. In your latest analysis, you wrote “And when you can find one of those rare situations when you have found an investment that looks incredibly attractive and nobody else wants it (or they hate it) that is usually the best time to get aggressive on that investment.” You went on to discuss the most hated stocks in the portfolio, but you did not distinguish those that were selling “the best product to a mass market” and those that were hated for other reason(s). All the stocks mentioned were rated 8 in your recent latest positions (Oct 7) – except BA which was rated (7) and possibly WORK (I couldn’t find any rating). That list is already 3 weeks old and does not reflect the recent movements in the stocks. Is there a question here? I’m not sure, but it can be hard parsing your posted thoughts and figuring out how aggressive you are suggesting you might be on any particular stock.

Q. Perhaps you might consider a weekly(?) update of your ratings in this kind of abbreviated format, i.e., with minimal write up. Of course that will probably result in lots of reader questions asking you to elaborate on why a particular rating changed (or didn’t) in any particular week. Still seems like it might be a good idea and might actually help all of us focus our thoughts.

A. I’ll think about it. I’d be worried not only that it’d make us focus on the short-term rather than the long-term though.

Q. This morning you wrote:”Believe it or not, I’m looking into trying to buy some WeWork here”. WeWork is not the same as WORK (SlacK), correct? WeWork is owned by Softbank and is not publicly traded? How are you looking to but some? Is this through your fund and not for the Trading With Cody portfolio?

A. I actually almost added this parenthetical when I wrote that: “WeWork is now known as the We Company and was going to use the ticker “WE” which is another terrible ticker symbol but should not be confused with Slack and its WORK ticker. Correct, I’m trying to locate some private shares to buy in WE for my hedge fund. It’s not publicly-traded and probably won’t be for a few years. I’m trying to figure out a way for Trading With Cody subscribers to easily invest in some of these private companies but it’s not easy for the hedge fund to invest in these types of private deals either right now. Regardless, I only have a tiny bit of the hedge fund invested in private deals anyway.

Q. Didn’t SoftBank just throw good money after bad so as not to recognize a zero value on their investment. WeWork?

A. Yes, exactly. The company is basically recapitalizing here at a fraction of its recent valuation (which was certainly inflated anyway). The point is that nobody wants to touch WE right now and if it were a publicly-traded stock, it’d likely be a terrific short-term trade and it might be a good long-term investment here at its new valuation.

Q. What did you observe based on the results of your twitter poll between Teams and Slack ? (I use Teams every day and have never used Slack though have heard great about it )

A. Slack beat out Teams by a fraction but there’s clearly room for both to penetrate the world further as most people haven’t used either according to my poll. That said, 163 people answering a Twitter poll isn’t statistically significant enough for me to use the data other than anecdotally in my analysis. 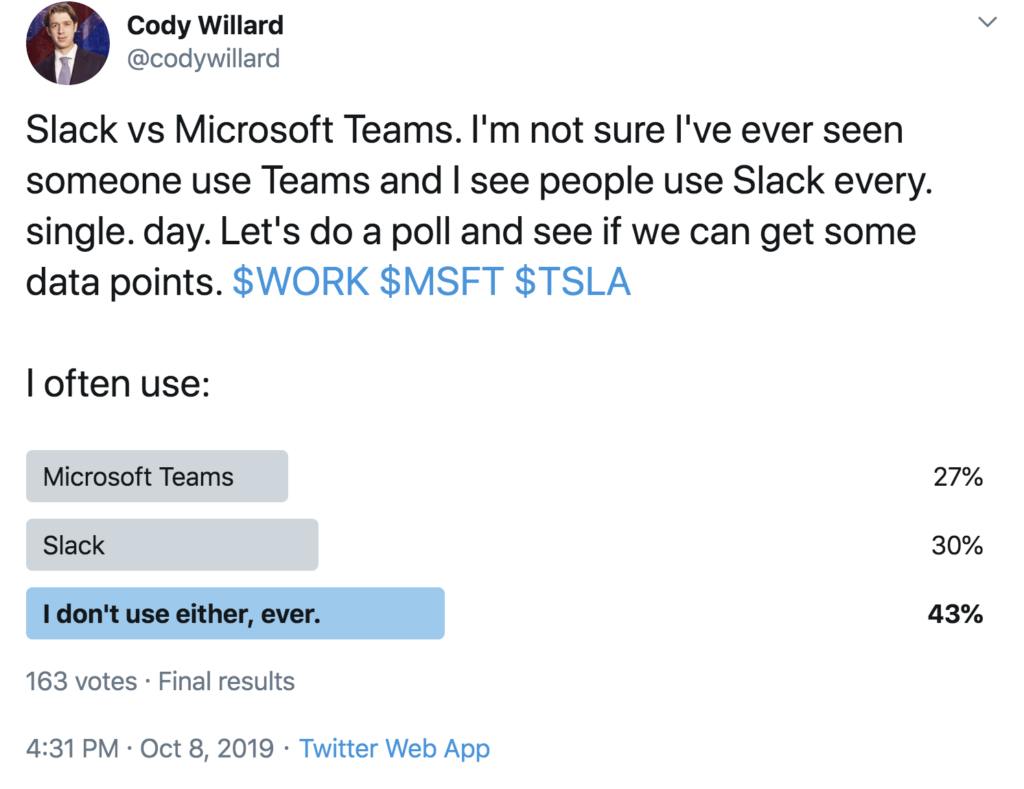 Q. Cody, with the likely adoption of EV as the future of transportation, which industry or which company if any would make a good short?

Q. Cody. In the article on ARK INVEST, it mentioned “Wright’s Law” concerning auto manufacturing and that EV auto manufacturing efficiency would increase a certain amount for every doubling of EV produced. Do you subscribe to it? It claimed that Tesla would produce EV at or over 30% gross margin (at the current ASP) on the next doubling of EV produced which could be soon.

A. I’ve briefly studied Wright’s Law (also known as Experience Curve Effects) after seeing ARK mention it a few months ago in their Tesla coverage. It makes sense to me.

Q. Cody-man, like Pac-man. We need a board game that follows you around: investment, TV, a dash of politico, and family time. ‘Game viewing’ is big time, maybe we just watch you play!

A. Truth be told, my recent trip to NYC was full of fascinating meetings with TV executives, celebrities, Wall Street analysts, Judge Andrew Napolitano, politicos, and others too. That said, the part of my life that would be guaranteed to make you smile would be playing with my kiddos — their smiles are infectious.

Q. Cody – IPOA with name change to SPCE and options enabled, could it go on a parabolic ride up in next couple of years ? Looks like lot of volume and price appreciation on SPCE….Maybe volatility is coming to this sector?

A. I don’t know about “parabolic” for the stock, but the company will be shooting some people into parabolas in the next couple years. The Space Revolution will be huge and this is a small part of my Space Revolution basket.

A. For the last few years, I’ve answered my Trading With Cody subscribers questions about whether we should buy Nokia basically the same way: Too much legacy business and the stock’s just not attractive here. Well, the stock is down 70% over the last 5 years and has been cut almost in half this year. The dividend yield is now over 6% and the answer to your question is that yes, we should be looking at NOK here. I am digging into it deeper myself right now. Let you know in a Trade Alert if I buy it.

Q. What do you think about investing in companies like Crowdstrike now that it’s 50% off it’s highs?

A. I like NOW better than CRWD. Crowdstrike’s not profitable and is trading at a higher price to sales ratio than NOW.

Q. Why no love for MSFT? I know they aren’t a ten bagger but gotta think they are a “safe” stock and a growth stock, no?

A. Yes, and I kick myself every time I see the ticker. It’s a bit extended here now, but it’s probably still a long-term hold.

A. I don’t think it’s helpful to try to game lock up periods. I think each of these stocks is hurt more by being associated with Softbank than a lock up period ending.

Q. Thx Cody, I had connection issues. What is your target/guess for FIT if acquired?

A. I doubt anyone wants FIT, but if it got acquired, it’s probably be for 50% premium to today’s prices, I’d guess.

Q. Hi Cody, What do you think about the stock INSP? It is revolutionary in that it’s changing the lives of CPAP users so they don’t have to use that terrible machine every night!

A. I like the business and the gross margins of 70%+ are nice too. But it’s a very small company, doing just $75 million in sales this year and not profitable but trading at 10x next year’s sales estimates. I’d have to meet the company to truly get comfortable with this name, but it looks interesting for sure.