The first time I went on national TV, back in 2002, it was when Jim Cramer had me on as a guest on his first CNBC show, Kudlow & Cramer. I remember wincing in pain as the show ends because I’d just broken my hand that morning but didn’t realize it until I got it X-rayed a few days later. At the end of the that first appearance, Cramer and Kudlow each unwittingly vigorously shake my broken hand. Jim and Larry have been important influences and friends of mine ever since.

I had someone back up a bunch of files from some old computers I had in NYC and while I was searching for some original music from my rock/rap/fusion/country band, The Muddy Souls, I found an MP3 file called, “New Media Talk with Cody Willard,” which I didn’t recognize at all.

When I listened to the file, I found I was listening to myself sitting down with Larry Kudlow in 2005 talking about The Media Revolution on his first ever podcast (and perhaps CNBC’s first ever podcast). Larry these days is the Director of the United States National Economic Council (ie, chief economist at the White House), and I’m proud that Larry’s been reading my columns since I first went on his show 17 years ago. 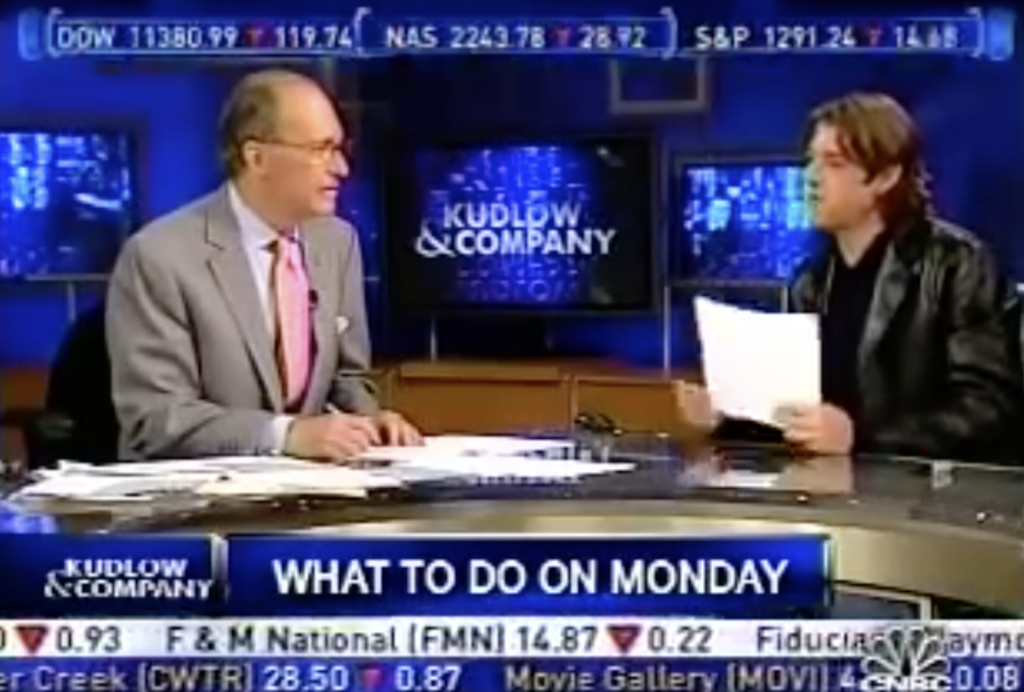 Some of the topics Larry discussed in his first podcast in 2005 now seem quaint, including how Larry asks me if we are actually doing a podcast as we’re doing the podcast:

“Larry Kudlow:
Now, tell me about, first of all, are you and I right now engaged in podcasting?

Cody Willard:
We are at this very moment helping revolutionize the entire delivery of audio content.

Larry Kudlow:
How do you feel about that? You and I breaking new ground here. That’s really something. Cody, Wyoming. I’m honored to be part of this with you.

Cody Willard:
Well, thanks Larry. I’m absolutely honored to be a part of it with you. And this is absolutely, we are breaking ground and driving this entire revolution.

Larry Kudlow:
Because somebody can dial into this and play it on their digital music player. Is that what’s going to happen?

Cody Willard:
Essentially it’s even easier than that. There’s already, and I don’t know the number off the top of my head, but several million people have already signed up for a podcast subscriptions …”

Several million people?  Fast forward 14 years and more than half a billion people listened to a podcast in 2019.

Some of the topics Larry and I hit on were dead on. The stock I talk incessantly about, Apple, was at just about $8 per share at the time, meaning that it’s up more than 30x from where it was trading. You’ll hear me explain that:

Larry Kudlow:
Cody, why is Apple so far ahead? Have its potential or putative competitors not taking this up? The Dells of the world, the HPs of the world, for example, or others?”

Larry asking me why Apple’s wannabe competitors can’t compete reminds me a lot of how people today ask me “Cody, why is Tesla so far ahead? Have its potential or putative competitors not taking this up? The GMs of the world, the Fords of the world, for example, or others?”

My answer today about why Tesla is winning would be similar to how I answered Larry back then about why Apple was winning. Back in 2005:

“Cody Willard:
The competitors have tried. It’s one of those things where, you know, there was an existing marketplace for MP3 players. Simply put, the Apple just rolled out a product that was so much better than anything else in the marketplace that it just sort of, it caught everyone’s attention and it became, of course, over the last two years, the iPod sort of became the single most important present to give anyone between the ages of 15 and 30. Everyone had to have an iPod. And once that happened, once Apple sold, I would say, you know, probably between five and 10 million of those units (they’re up near, it’s 25 or 30 million at this point). Once they hit five or 10 million though and establish themselves at about 50, 60% of the market share, they basically established themselves as the standard for music, for digital music.”

A total 25 or 30 million iPods? Apple can sell 3x that many iPhones in a good quarter these days (with an average selling price of 3-4x more than the iPod). Today, in regards to Tesla’s lack of competition, I’d say:

The competitors have tried. It’s one of those things where, you know, there was an existing marketplace for cars. Simply put, the Tesla just rolled out a product that was so much better than anything else in the marketplace that it just sort of, it caught everyone’s attention and it became, of course, over the last two years, the Model 3 sort of became the single most important car on the road. Everyone who’s ever been in one, had to have a Model 3. And once that happened, once Tesla sold, I would say, you know, probably between a quarter to half million of those units, (they’re up near, half a million at this point). Once they hit a million units per year though and establish themselves at about 2-3% of the total global market share, they basically established themselves as the standard for electric vehicles.

How many cars/trucks/semi’s will Tesla be selling each quarter in fifteen years? I’d guess it will be more than 10 million units per year with an average selling price of 2-3x today’s ASP.

And finally, here’s something I was hitting on fourteen years ago that is now really front and center for investors in Netflix, Comcast, Disney, etc:

“Cody Willard: I mean, and it’s not just newspapers, you’re already seeing it in the video company, in the music companies from Warner Music Group, to Viacom, to anyone who you know, has relied upon the old models of music and audio. Next, and this is I think where you were about to go, is the video revolution, but those, it’s the cable companies and the networks and the movie studios that are really going to be put under pressure.”

The best time to invest in the companies that were about to disrupt cable and movie theater networks was when few people saw the News/TV/Movie/Music/Streaming Revolutions were about to hit. That is, when the information was imperfect and only visionaries were doing so (remember my column about Disrupting Our Own Future). And as I keep hitting on lately, these days we should be investing for The Space Revolution, The Driverless Revolution, The Robotics Revolution and a few other Revolutions that are probably just burgeoning.

On the other hand, we should always remember how many times Apple, Google and all the other companies that have driven the News/TV/Movie/Music/Streaming Revolution have each been down more than 50% at one time or another even as they’ve risen 20-50 fold over the last fifteen years.

Trade like NPH: Latest positions (with a new ratings system)
Small trade, just getting a toe in the water
This Ain't 2007, There's No "Right" Percentage Of Cash To Hold, Balance Your Portfolio And More
Google, Amazon, Sony, AMD, solar: Be paranoid, but not scared
Cody Kiss & Tell: The Next Apple, The Next Crash, and much more