China’s crack down on business has demolished a lot of Chinese stocks here in the US. Everybody’s panicking about exactly the stuff I’ve been warning everyone about when it comes to investing in China, a communist regime — random enforcement of laws, corruption, a lack of transparency…

And when I say everybody, I mean, everybody is talking about the Chinese crack down and its impact on stocks and if the person talking has an opinion about Chinese stocks, it’s going to be that you should sell them all and run for the hills. As the collapse of these stocks has accelerated, there’s staring to be some margin calls out there and that forced liquidation is working its way through the markets today in not just Chinese stocks but also in some of the good ol’ US of A stocks too as the major indices here are down 2% across the board and the crappiest of the small cap tech stocks that I’ve long warned are in crash mode are, well, crashing.

I’m going to make a little bit of a contrarian bet here into this forced sell-off action in the Chinese stocks by nibbling a little bit of Tencent and MCHI for a shorter term trade. And I’m buying back a little of the JD that we’d sold at higher levels at some points during the past few months. Be careful out there, as always because if Chinese stocks keep crashing, the action from those names could accelerate in their impact on the US markets.

One of the big tells that the market has turned from Blow-Off Top phase to being somewhere on the other side of the Bubble-Blowing Bull Market for most stocks is how they react to news of new money raises. In January and February and into March of this year, whenever a company would make an announcement declaring that they were selling securities to raise money for the balance sheet to invest in their businesses, the stocks would rally on the news. That’s not the case any more as Virgin Galactic and Infinity and many others who have raised money have seen their stocks collapse on the news. The reaction in both of those stocks and many other names that have reacted to money raises similarly is more reflective of the continued collapse in thousands of small cap stocks, most of which are down 70% or more from their highs from earlier this year.

Meanwhile, I want to keep reminding you that there are literally hundreds of stocks that have come public in the last year or two that will go to zero. Some of them will be fraudulent. Some will suffer from bad luck and just fail. Doesn’t matter why — they’ll cost people billions in coming months and years. There’s a lot of trash in the markets. I took the picture below when I was describing how I think there’s a lot of “trash” in the stock markets and in the crypto exchanges while on a road trip to White Sands last weekend and happened to look out the window at the train going by with coincidental worded graffiti on it: 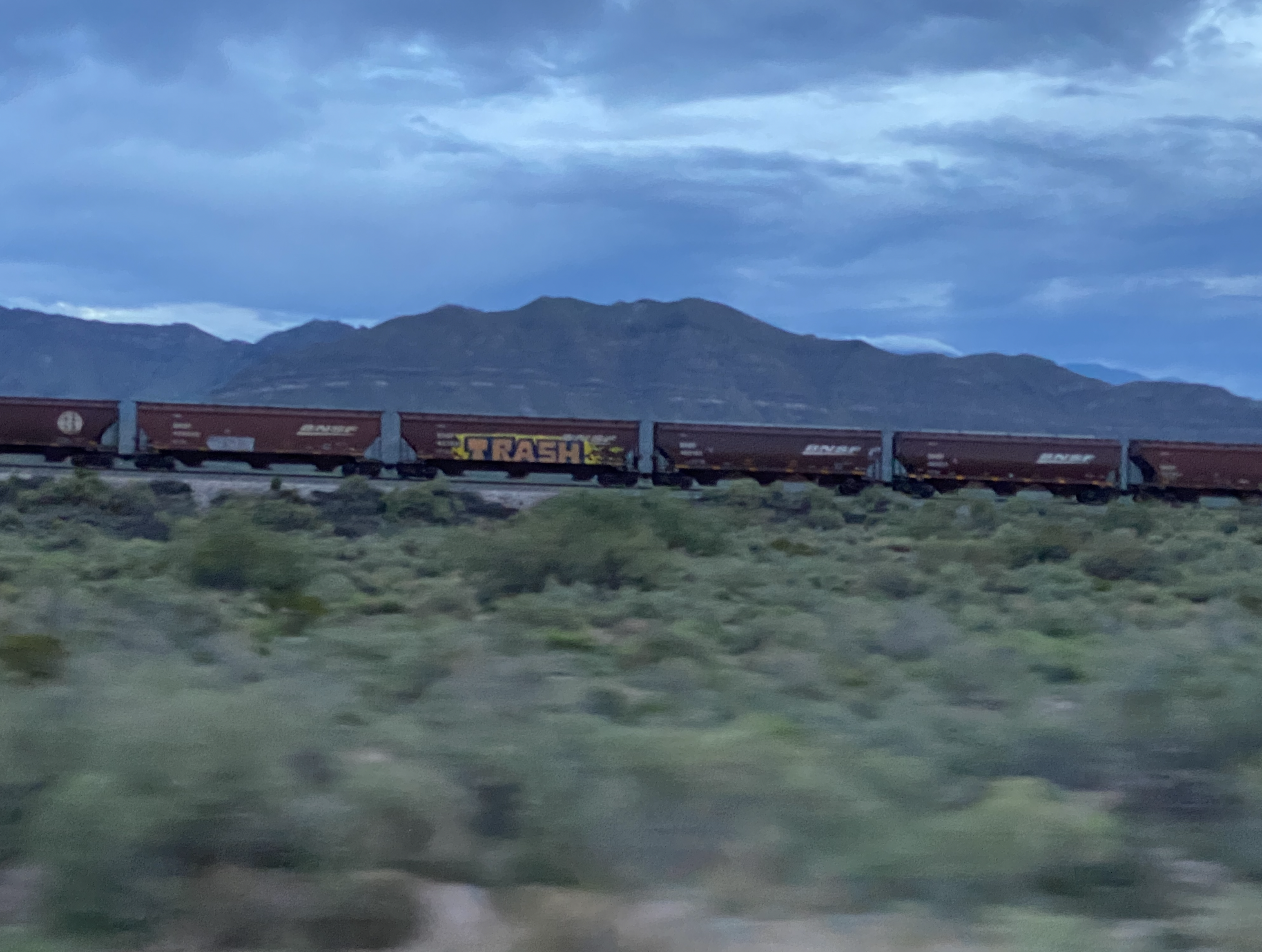 Also meanwhile, entered earnings season and the reaction to Tesla’s report last night will either turn out to be an outlier or a harbinger of what’s to come for most tech stocks. The report was fine, even stronger than expected. While the commentary from Elon — who said he won’t be on most Tesla earnings calls from now on and which I think is probably fine because he has plenty of other outlets through which to communicate with us — was focused a lot on supply chain problems delaying them getting my Cybertrucks sent to me by the end of this year, so maybe that’s what the market doesn’t like. Or maybe, like with the action of the stocks from companies that raise money that I mentioned above, today’s sell-off in Tesla is more indicative of a broader market pullback than it is of Tesla’s earnings report itself. We won’t have to wait long to find out which it is, as Apple, Microsoft and hundreds of other companies report earnings this week.

In the hedge fund, I’ve still got a lot of short hedges and plenty of puts on the sheets but I am, as you might expect, covering part of the shorts and selling a few of the puts into this panicky action today. Other than the aforementioned nibbles, I’m sitting tight in the personal account today as has been the case most of the time lately. I do see some bargains beginning to develop as the broad-based collapse (can we call a 70% drop over a four month period for thousands of small cap tech stocks out there a “crash”? Yes, I think we can) — I do see some bargains beginning to develop as the broad-based CRASH in the small cap tech sector has accelerated lately. Stay tuned, I do think we’ll have some new names to buy and send out Trade Alerts for in coming days and weeks. No rush, as always.

Our mission, in case you forget it, is to slowly and surely build wealth while minimizing risks for our livelihoods over the next ten, twenty and thirty years. We’ve been patient with our many 10-100 baggers that we’ve had over the last twenty years and we’ve been patient while the Blow-Off Top Phase Of The Bubble-Blowing Bull Market has played itself out for thousands of stocks (and cryptos!) from top to crash. Now we can patiently start to sift through the rubble in these names (even as I plan to remain short many of the crappiest small cap tech stocks for a while longer at least). Don’t let FOMO, MOMO, YOLO, Blow-Off Top Phases, Sector Crashes or anything else distract you from the mission of building wealth while minimizing risks over many years.

Trade Alert: Get More Defensive in a Fog of War
Trade Alert: INTC, BKS and AAPL updates
CORRECTED - Trade Alert: Not zen about ZEN (and a note on Tesla and Slack)
Trade Alert: How I launched a hedge fund (and learned to balance my portfolio)
Trade Alert: Mining for options, tech apathy and other notes