Well, many stocks, including (especially?) technology stocks have been smashed in the last few days. Let’s look at some charts for some perspective. Looking back over the last, say, three months, you can see that some of our biggest long positions have been up nicely, while I’ve also unfortunately ridden some losers lower: 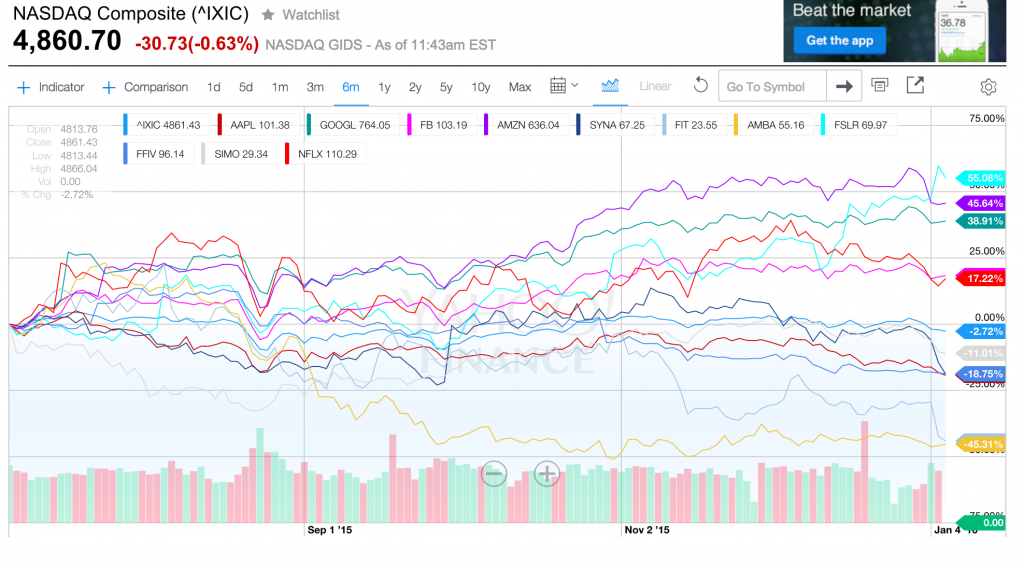 Our shorts, other than the IBB puts hedge, have all worked well during the last 90 days: 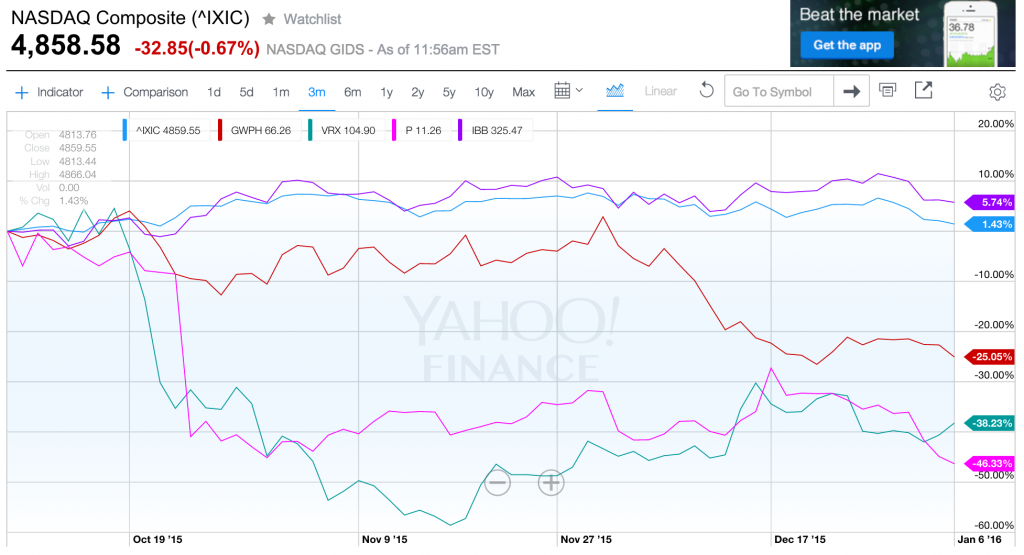 But the Nasdaq is down about 5% in the last five trading days and most of our long positions have been hit too, some in big ways: 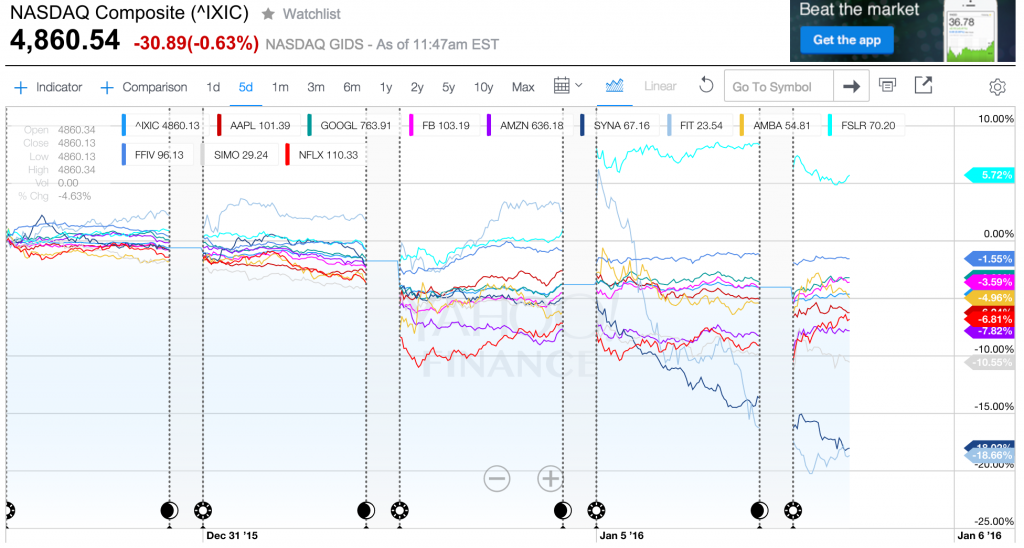 The shorts are mostly working over the last five days too: 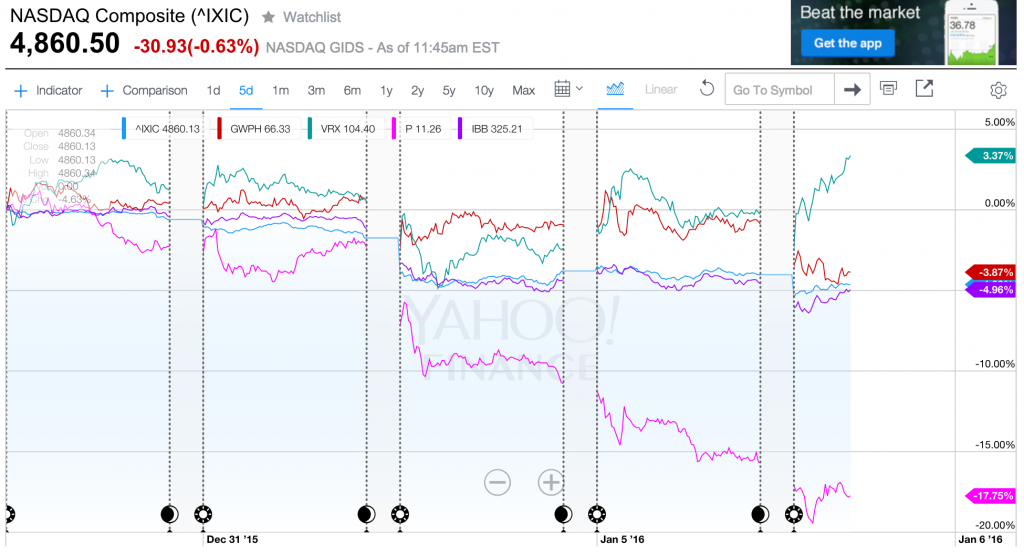 I’ll be frank, I’m frustrated and disappointed in myself for riding Fitbit and Synaptics and Sony lower like I have. To be sure, I’m going to make mistakes and won’t have all winners and I won’t nail every market move. That doesn’t mean I’m not trying to though!

Let’s review our playbook. We seek to own companies with very strong balance sheets that are revolutionizing and/or outright creating their industries. We try to buy those companies cheaply/early like we did with Apple in 2003, Google on its IPO, FB near $20 after its crashed IPO, First Solar after letting it crash in the alternative energy bubble pop, and hold onto them for many years. We start small and slowly in each position, recognizing that there will be many ups and downs in each stock in the years ahead. Since we believe in these companies ability to grow as they revolutionize their industries over many years, we scale into our long positions when the stocks are getting hit and we trim them when stocks rally hard. We get aggressively long after stock markets crash and we whittle down our long exposure when markets bubble.

Long-term subscribers know that we’ve trimmed our remaining longs, and outright reduced the total number of longs in the portfolio and added shorts in the last few months. All that said, I don’t think we’ve seen the last of this Bubble Blowing Bull Market.

I am planning on adding couple new names to the portfolio in the next day or two as there are some opportunities to buy some very good companies with great balance sheets at big discounts to their recent highs.

In the meantime, today, I’m going to go ahead and make two buys today, increasing my net long exposure a little bit more into this sell-off. First, I’m going to nibble on some Apple call options here. I’m buying a small batch of AAPL call options that expire in March with strike prices around $105 for about $3.50 each. These options, along with my existing long-term core position in Apple common stock when I’d bought more of last week, will essentially make Apple my largest position once again, as it has been many times in years past.

The current pain in the portfolio and the panicky sell-off in the Nasdaq to start off this new year reminds me a bit of this past August when we snuck in and scaled into more stocks as the markets were crashing all around us and I reminded you of our playbook:

“Remember just 32 days ago, I wrote this:

‘We have a lot of stocks up big today, which has been a recurring theme for our portfolio during earnings season so far. Many of our biggest positions are at or near all-time highs. If you haven’t done any trimming, consider doing so. Maybe 10-20% of some of these biggest winners or about that same amount of some of your most recent big winners.

It’s easy to get carried away in the momentum and to start feeling invincible when so many of our stocks are so far outpacing the broader markets which have been struggling all year. In the Trading With Cody Chat Room today, there are a lot of comments like these:

Just a reminder that it’s better to sell when you can, not when you have to. And on that note, I also noticed that my ratings for most of our long positions crept lower this month, as most of our stocks ran higher.’

Let me rephrase that post according to today’s reality:

We have a lot of stocks DOWN big today. Many of our biggest positions ARE BACK DOWN to levels they haven’t seen in many months. If you haven’t done any BUYING, consider doing so. Maybe NIBBLE ON 10-20% of WHAT YOU CONSIDER A FULL-SIZED POSITION.

It’s easy to get carried away in the momentum and to start feeling THE PANIC when so many stocks AND the broader markets ARE BASICALLY CRASHING. In the Trading With Cody Chat Room today, there are a lot of comments like these:

Just a reminder that it’s better TO BUY INTO PANIC, NOT SELL INTO PANICS. And on that note, I WILL TELL YOU that my ratings for most of our long positions JUMPED HIGHER IN THE LAST WEEK, as most of our stocks HAVE COME DOWN.

It’s been said that stocks go up like an escalator and they go down like an elevator. So it goes. And while most money managers were bullish and getting longer when the markets were at all-time highs and/or rangebound near all-time highs, the same folks are now panicking and selling and turning bearish.

If you trimmed when stocks were higher, if you follow the playbook, you’re not sick to your stomach today — you’re looking around and starting to pick up some shares. Don’t draw a line in the sand, don’t try to nail the bottom. Just scale into some more long exposure while others are panicking.

That’s exactly what I’ll be doing this morning as I nibble on some of my highest rated stocks. I’m not going to go all-in and I’m not going to load up on call options (yet?), but I am going to scale into more long exposure while others are panicking.

So, my daughter Amaris has a doctor’s appointment this morning and I’ll be there with her early and then I’ll be back before the midway point of the trading day. This morning, I’ll be nibbling on some:

Keep your heads up, keep your cool and stay vigilant. We have a playbook for this. I’ll be back with another post in a bit.”

Cody back in real-time here. All that advice stands strong still today, right? And you know what? We later took profits on those Apple, Google and First Solar shares we bought that day and sold all of our EZCH near $25 when the company announced it was getting acquired. Let’s stick with our playbook and let’s fight the inclination to panic.