Little Amaris is still in the hospital with a tear duct infection and my wife has been there with her for 10 days. She might get to come home tomorrow, we hope. Thanks for understanding, for the prayers and well-wishes. Here’s a shot of her older sister, Lyncoln, making her laugh with kisses on the forehead at the hospital the other day. 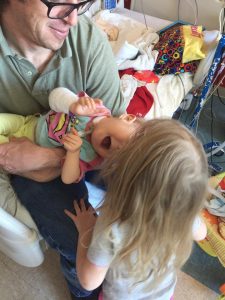 The stock markets remain resilient. I spoke to one of my old hedge fund buddies today who had built up a bit of a short position against the stock markets a few weeks ago as the DJIA was breaking 21k. He told me today he’s unwinding most of those shorts as his thesis, that the market would pullback as the Trump Health Care so-called “reform act” and corporate tax so-called “reform” would face setbacks and that the market would likely pullback as a result. The so-called “reforms” did face setbacks but the market didn’t crack. He’s thinking that his theory has played out and he’s likely taking a small loss overall on the trade after slippage, spreads and time erosion.

We also discussed how the stock markets faced other potential downside catalysts since he put his short on, in addition to the “reform” setbacks. The Syrian and Russian escalations, North Korea and China issues, terrorist attacks around the world, etc. The DJIA even had a couple -200 point days, but still didn’t crack.

At any rate, he’s going to be disciplined and move on now that his thesis played out. Good lesson, as always.

Of course, that doesn’t mean it won’t finally crack for another reason or ten tomorrow.

Steady as she goes.

Consumer Electronics Show, the Driverless Revolution, the IAm App...
Nervous charts, social investing, and Apple's cash
Best apps for investors and traders
Steal from the savers til their morale improves. Or, Why we have yet more bubbles ahead
Analysis on $AAPL and recent IPO $BOX