I’m about to leave for the airport as, I’m headed to the Consumer Electronics Show in Las Vegas. I’ll be gone the whole week, but I’ve got some great meetings set up that run the gamut from Intel to one of the hosts of Shark Tank to Hyundai. I’ll be seeing all the latest driverless technologies and am trying to set up more meetings with Ford, Mercedes, GM, Toyota, BMW and the other car companies.
I’m going to be hosting a fireside chat on opening day at CES in Las Vegas with my old friend, Neil Patrick Harris, talking why he’s become a full-fledged partner and brand ambassador for The IAm App, and how media has been revolutionized during our lifetimes (details here). 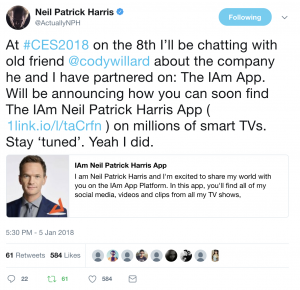 The IAm App will also have NFL legend Terrell Owens and director/writer Bobby Farrelly (Dumb & Dumber, Something about Mary, etc) attending/appearing at CES with us.

We’re partnered with a company who will be putting some of our IAm Apps into millions of smart TVs next month. And we’re starting to partner with driverless car companies to put these apps into driverless car dashboards next.

The IAm App will also be making some big announcements about how we’ve partnered with Samba TV to put some of The IAm Apps — including The IAm Neil Patrick Harris App, The T.O. Sports Network App hosted by Terrell Owens, and The Farrelly Brothers Movie App — onto millions of smart TVs in the next month. NPH, T.O. and Bobby Farrelly will all be joining my team and me at CES for these announcements. And we’re starting to partner with driverless car companies to put these apps into driverless car dashboards next.

We’ve got some great press coverage already, but I would also ask you dear Trading With Cody subcribers to help us also set up to as many meetings and/or press coverage as possible. Email me directly if you can help.

And other than that, you can bet that I’ll be making notes, taking pictures, learnings and analyzing everything going on at CES. I’m working on a new book about The Driverless Revolution that will of course include stock picks and other ideas and that you TWC subs of course will get to see before any body else. Can’t wait to get back from CES and tell you guys everything. Can’t wait to get to CES and get started. Stay ‘tuned.’ Yeah, I went there too.

Lots of headlines, but where's the latest about Russia/Ukraine?
The Scutify Family of Apps and the App Revolution
In search of safe high-yield and diversification: Picks and allocations for retirees
The Hundred-Billion-Dollar Wearables Market
Highflying stocks: Nemesis for the hubristic coming sooner rather than later