Here’s the transcript from this morning’s Live Q&A Chat in the Trading With Cody Chat Room. Facebook Live on Facebook isn’t working this morning, so we’ll do The Cody Willard Show tomorrow at 11am ET.

I remember when we launched Fox Business with my show Happy Hour as the first programming on our first day and the sound feed cut off ten minutes into our show! I guess we should try to cut Facebook some slack. Facebook Live, Periscope Live, live streaming from a computer in Ruidoso NM is pretty amazing, and the fact we can put together a show like The Cody Willard Show without having invested $50 million into a control room and stuff is incredible. Anyway, we’ll do The Cody Willard Show tomorrow at 11am ET. By the way, we now have a website for the show now called appropriately, TheCodyWillardShow.com.

Dude’s got dozens of retweets for that post though. Anyway, here’s the transcript from this week’s Live Q&A Chat in the Trading With Cody Chat Room.

Q. Hey Cody – how and when do you think The Great Trade War of the 21st Century ends? Related question: do you think the guy currently occupying the White House has any real plan/strategy on trade?

Q. Related question: do you think the guy currently occupying the White House has any real plan/strategy on trade?

A. Every President of the US that has come from the Republican or the Democrat Party in my adult lifetime is simply a tool of the giant global corporations and banks that funded their platform and election and wrote every law that has been passed by any President in my adult lifetime. So, sure, he has a plan to maximize his and his sponsors and bedfellows returns.

Q. VZ beat on top and bottom line. Any thoughts on the stock?

A. All about that 5G, that 5G, that 5G (Meghan Trainor – All About That Bass – https://www.youtube.com/watch?v=7PCkvCPvDXk). Remember in the previous Latest Positions write up I noted this about Verizon: “If Verizon can stay focused on 5G and not overspend billions of dollars trying to become a content company, there’s a good chance this stock can run to $100 or $150 in the next three to five years.” Well, guess what Verizon just confirmed in that quarterly report — that they’re throwing in the towel on a lot of their Hollywood-wannabe content-related ventures and focusing on being a communications networking company. Here’s a good article about that on Bloomberg. Good quote from the article about that here: “Verizon is signaling that its focus will remain where it’s always been — on its network technology — rather than jumping on the deal bandwagon or going all-in on a content bet. That’s not for lack of trying.” 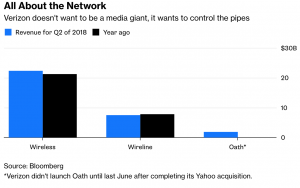 Content at Verizon via Verizon’s Oath business, which is comprised of Yahoo and AOL, is about 6% of Verizon’s revenue. I hope they sell Oath and become a 100%-Communications/5G company.

Q. Historically, the demand for memory is cyclical. Are things different this time? I am invested in LAM, AMAT and MU.

A. Yes, things are a bit different, cycles still matter though. For one thing, there are much fewer competitors since the Republican Democrat Regime has allowed the industry consolidate down to less than a handful of competitors. And that’s a HUGE difference.

Q. I noticed that since the last update, you lowered Sony from an 8 to a 7, even though it’s around the same price. Not a huge difference, but just curious as to why (also being that triple digits were mentioned in the prior update but not in the latest)

A. I often note at the top of the Latest Positions write-up that the change in ratings from one Latest Positions write-up to the next will reflect my own overall stance in the market. I look at each stock individually, its fundamentals, its valuations, its momentum (or lack thereof), its potential for upside surprises over the next few quarters and its context amongst the broader markets when I do those Latest Positions analyses and ratings. So, I’m still quite bullish about Sony for the next few years, but I just ended up at a 7 instead of an 8 when I finished that analysis. Sony’s got a lot of moving parts and its likely to be affected by The Great Trade War of the 21st Century, which itself has escalated in the last few weeks. But content, image sensors and even TVs are good upside potential revenue generators for the company in the next five years.

Q. $GOOGL with a nice earnings beat after hours up 4%. Super-impressive even after taking the record European fine into account. Here’s where the mixed feelings that Cody talks about come in: (a) obviously happy as a shareholder, yet more than ever (b) cognizant of the fact that massively rich companies like Alphabet don’t have to look over their shoulder at regulatory authorities (at least out of fear of crippling fines) wherever they do business but (c) hopeful they somehow at some meaningful level are holding on to their early gains.

A. Totally agreed about points a) and b). As far as c) is concerned, I’m not too focused on any single day’s price action.

Q. Hello there. Any thoughts on SHOP? Motley Fool sent me an email calling SHOP the next AMAZON. I doubt it, though wanted to get your thoughts. Thanks.

A. I’ve struggled with SHOP for the last year as I’ve analyzed it. Here’s something I wrote about Shop back 10 months ago. “With Shopify being valued at $11 billion earlier this morning, now at 15% less than that, it is still a very richly valued company. I have been doing work on Shopify five for the last few weeks and just haven’t gotten comfortable enough to buy it.” I’m still in that same boat — I like the growth rate of 40% plus at this company but I don’t like buying a stock trading at 12x sales and 250x next year’s projected earnings. If Shopify can continue to grow the topline at 40% plus for the next 2-3 years, the stock could double from here, but if they miss that 40% plus that Wall Street is looking for here, the stock could drop in half. So I’m just no comfortable getting into SHOP here.

Cody writes: Chat quote of the week from TWC subscriber Gambler15: “Someone get this man a stock that will double by Friday…” PS. How long have been reading my stuff and/or trading emails with me, Gambler15?

Gambler15: @cody Hey now! I was referring to our member mikew29 who was displaying some impatience regarding some TWC picks… not me, good sir!

Cody writes: Why you gotta throw a different TWC subscriber under the bus, man. I know what you were saying — that’s what made it so funny. I should have written: “Chat quote of the week from TWC subscriber Gambler15 came in response to someone who was upset that CALX, one of our smallest positions and a small cap long-term binary investment, is down 10% in the last week.: “Someone get this man a stock that will double by Friday…” PS. How long have been reading my stuff and/or trading emails with me, Gambler15?”

Gambler15: Old school, baby… 15 years at least? Back from the RealMoney days. And just as a plug, I believe @cody wrote a little thing called The Telecom Connection back in the day, so I think he may know a little bit about that Verizon company and it’s exciting prospects… great for us TWC subs.

Cody adds: This back and forth is very funny: “Too bad you aren’t much of a gambler as your name indicates, Gambler15.” “The Gamblers are a hockey team sponsored by my company, so I guess one can say I’m always gamblin’, heh. Personally I prefer to do any betting in AC or Vegas rather than using investment funds, but to each their own.”

Question: At what price are you a buyer of SQ? I have some and think long term it is a winner. Actually want to buy more and have wanted to buy more but haven’t because the price keeps going up.

A. I don’t know if I have a specific price I’d buy SQ at, but I sure do enjoy kicking myself for not ever having bought it, despite calling it a Revolutionary company for years now. @(*&@)(*&!